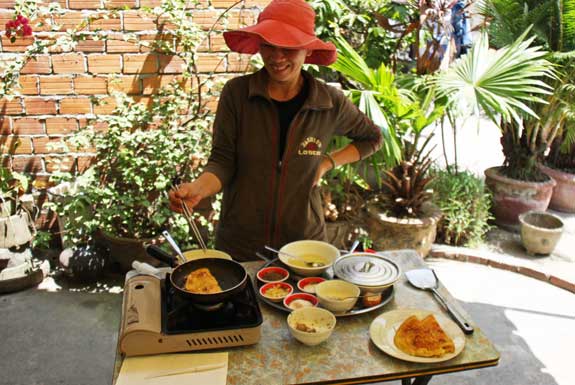 One of the most striking differences from one typical residence to another is the size and scope of the kitchen. Moving all over the world it’s dawned on me that American (and Canadian and perhaps Australian) kitchens are quite unusual and they seem to be getting even more so recently.

Unless you grew up in New York City, an American kitchen tends to be double or triple the size of kitchens in most of the world, and there’s a new trend to make them larger with center islands and such. I know many parts of Europe also have kitchens filled with barely-used gadgets, but I think Americans are most guilty of this lifestyle trend.

I’m reminded of this by a recent article by a friend of mine for Matador, where she seems to be complaining that large kitchens are inferior to smaller ones. That part doesn’t make much sense to me, but it did remind me that getting used to a tiny kitchen wasn’t nearly as difficult as I expected.

Less isn’t more, but it is enough

When I was living in the United States I had a counter-top filled with gadgets, and several more in cabinets and even boxes because I had no room for them. I’m a pretty good cook, but nowhere near as good as the typical cook in a family-run Vietnamese restaurant. They typically have a menu that literally stretches 20 pages filled with Vietnamese specialties in addition to pastas, sandwiches, and practically anything else you could imagine.

It was more than a little surprising to actually look into these kitchens during my four months in Vietnam, to usually see that they consisted of a 2-burner stove and a rice cooker. There were a few other things around, and plenty of different pots and pans, but most everything you could order could be made on two burners.

When I moved into my own apartment in Bangkok a while later I noticed the kitchen had only a faucet (cold water only), one hot plate, and an electric water kettle. The managers agreed to give me a second hot plate and even a microwave oven, but in the three months I was there I was actually able to cook a huge variety of things on the single hot plate alone. It turns out, that when you don’t have all the gadgets, you can still cook just about anything you want.

It’s true that with an oven I could have made a few more dishes that are impossible on just a stove top, but if you’ve spent time in Bangkok you know that no one wants to run an oven in their steaming apartment anyway, so it works out fine.

Among the more liberating things I’ve discovered about living on the road or in faraway lands is that I realize just how little I need to own to be happy. When I had a house in Scottsdale, Arizona (USA) I had a huge kitchen and over time I filled it with gadgets. For some reason, I bought an espresso maker (in addition to my coffee maker), a pasta maker (during a short-lived fresh-pasta craze in the US), an ice cream maker, a bread maker, an electric can opener, a pressure cooker, and several other things that are even less useful.

When you move to another country where the cost of sending gadgets there and back is more than they cost in the first place, it seems more natural to just do without them. And it’s quite a nice feeling. When I see a commercial or read an article about a kitchen gadget (or a non-kitchen gadget), there’s no temptation to get one because I have no place for it and when I move again there’s no way I can bring it with me.

It might be different if you have kids, but for the rest of us, something like an ice cream maker just isn’t a good idea. If you do use it a lot, chances are you spend a lot of time making ice cream, and then eating it, and if you don’t use it a lot then it just takes up space. In most places it’s just way easier to buy a pint of great ice cream once in a while.

Am I the only one who finds it liberating to not have space for mountains of appliances that most people barely, if ever, use anyway?