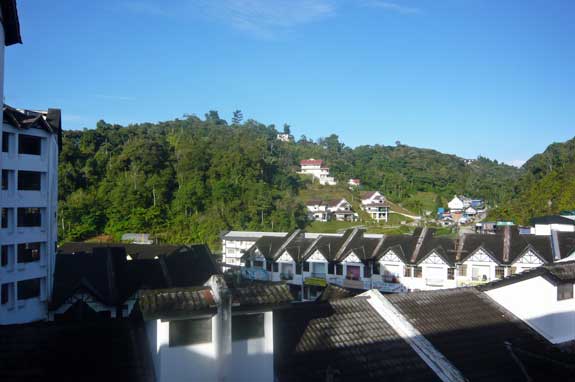 When most people think of perfect year-round weather, they typically think of places in the Tropics which never get cold. But when you spend a lot of time in the Tropics you realize that you need air conditioning most of the time, if not all the time. So where do people in the Tropics go to cool off? The Cameron Highlands is where for people from Thailand down to Singapore.

This group of 7 small towns about 1600 meters in elevation, about 4 hours north of Kuala Lumpur by car or bus, has pleasant temperatures every day of every year, from morning until night. In addition to being a gorgeous mountain setting, it’s one of the few places in the world where there is essentially no demand for a heater or air conditioner at any time of year. Days are in the low 20s C (around 70F) and nights are only a bit cooler.

The vibe in the Cameron Highlands

This area is what is known as a Hill Station in Asia, which means it was settled by Europeans in centuries past to escape the constant heat of the flatlands. Malaysia was run by the British before they gave up on it, so there are still some remaining British influences, but only a few. Many of the more expensive hotels serve scones with double cream and strawberry jam, and there is a golf course, though the vast majority of visitors are Malays and that’s about as far as things go.

For visitors there are two main towns to consider, which are Brinchang and Tanah Rata. Brinchang is smaller and it consists mostly of hotels and restaurants, while Tanah Rata is more like a real town with more businesses for locals. Both towns have several posh hotels not far from their centers, but Brinchang has far more budget hotels so it feels more touristy.

Aside from the mountains and scenery, the area is best known for its abundant strawberry farms and flower places. You can pick your own strawberries (not cheap though) or buy any number of products made from them. There are also 10 main hiking trails that range from easy to challenging, most of which leave from in or near Tanah Rata.

However, the main pastime seems to be just relaxing in the cool (compared to the rest of the country) weather. Families and couples stream up into these mountains on Friday afternoon and most go back home on Sunday, but some do stay the week. For those who are not working normal jobs in Malaysia, this means that visiting during the weekdays is a better idea, and quite a bit cheaper for hotels as well.

The cost of things in Cameron Highlands

Even though Malaysia itself is actually one of the more expensive countries in Southeast Asia, the Cameron Highlands can be done very cheaply for most people. There are a handful of luxurious hotels that start well over US$100 per night, and a great number of 3-bedroom apartments for rent in that same price range, but there are also over a dozen hotels with weekday rates starting at US$25 per night, and weekends about 50% higher.

Better still, the hotels are the most expensive part of a stay. Both towns are filled with restaurants where full meals start at US$2 each, if not less. Sure, you can pay US$6 to US$10 per person to enjoy one of the many steamboat (hot pot) meals, and you really should try at least one, but you can get filling Chinese or Indian meal for a lot less if you prefer.

Beer seems to be the alcoholic beverage of choice, and while it’s not as cheap as it is in Cambodia or Vietnam, it’s still cheap by most standards. A large 660ml bottle goes for around US$5 at most restaurants, with wine costing at least a bit more per glass.