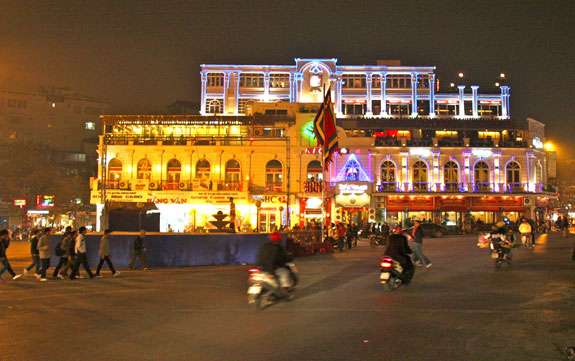 We recently discussed the 10 cheapest cities in Europe, which shows that not all of the continent is crazy expensive, but as most people know, the real bargains are all in Asia.

In fact, each of the 10 cities on the list below is cheaper than the cheapest major city in Europe, which is Sofia, Bulgaria. The cheapest major Asian city is actually only a bit more than half the price of Sofia, and it’s a pretty nice place as well, so those who are looking for an affordable place to chill out have quite a few options here.

To be clear, the list below comes from the site Price of Travel, which tracks prices of tourist costs in over 100 cities around the world. In Asia they’ve yet to add Dhaka, Bangladesh, among some others, and in general the rural and suburban areas around these cities tends to be even cheaper (as long as you can find a place to sleep). The Asia Backpacker Index for 2011 should at least give you some ideas of where to go in this huge continent, and all on this list are cheaper than Bangkok, which comes in at number 11.

Even with the massive growth in the tourism infrastructure in Bali, the island remains a great bargain. Now you’ve got dozens more fancy beachfront resorts to choose from, but you’ve still got hotel rooms in modest guesthouses that start well under US$10 per night, and quite good quality if you are willing to spend a bit more. Of course, if Kuta is this cheap then other villages on the island can be even cheaper, as can next-door Lombok, so Indonesia has plenty of options for everyone.

Cambodia’s capital has a bustling expat community and a steady stream of travelers drifting through as well. Sections of the city are quite seedy, which also happens to be one of the reason many tourists come in the first place, but overall it’s quite pleasant and easy to deal with for English speakers. Stay a few blocks away from the river and prices drop quite a bit.

One of Asia’s finest colonial-era cities, Luang Prabang has gone quite upmarket in the past decade or so, adding dozens of higher-end resorts and restaurants, but fortunately the budget traveler can still find great bargains if they look. As usual, if you stay outside the tourist district you can find things even cheaper, but even in the middle of everything you can get by eating great meals and drinking Beerlao on next to nothing.

Speaking of thriving expat communities, Chiang Mai Thailand is overflowing with Westerners, at least in certain districts. This city is famously cheap and has a much nicer climate that Bangkok, in addition to good quality affordable health care. A continued building boom means studio apartments for under US$200 per month should continue to be available for years to come.

This sprawling metropolis is not high on too many traveler’s wish lists, but those who go to the trouble are typically impressed. Manila is quite affordable itself, but for many the city is just a place to change planes to head to one of the famous beach resorts elsewhere in the archipelago, which are great bargains on their own.

Locals and plenty of expat residents continue to call it Saigon, but whatever you call it, this place is very cheap by international standards. Vietnam in general really feels on the move, and Saigon in particular is booming with new developments and building projects, so things should continue to get easier for outsiders.

Perhaps the greatest thing about Vientiene is that it’s a capital city with most of the modern conveniences you’d expect, but it still feels like a slow-moving small town. The attractive river front neighborhood is loaded with cheap and interesting restaurants and guesthouses, and this is another city where English speakers are well taken care of.

Some people who visit the central coast fishing village of Hoi An don’t seem to like the place for some reason, but for most people it’s their favorite stop in Vietnam. The old city center is gorgeous and authentic, and it’s also a budget-foodie paradise, where excellent meals can be found for under US$2 if you look around. The hundreds of tailor shops may not be as great a deal as they once were, but everything else more than makes up for it, plus a very nice beach is a short ride away.

Yes, Goa isn’t a city as such, it’s a state in southern India, but it’s usually regarded as one place by tourists, and it’s loaded with cheap beach towns that make it one of the world’s great travel bargains. Of course, not everything is so cheap, and if you come in season (December through Easter) it might be tough finding accommodation, but those who spend a little time looking around are usually rewarded with excellent deals and friendly service.

Hanoi has a bit of a mixed reputation among visitors, with many having experiences with some local merchants (and taxi drivers) that can sour the whole visit, but overall Hanoi is interesting, quite attractive at its core, and very cheap. Most of the expats seem to be English teachers, which is true in many on this list as well, but there are many others who’ve made Hanoi their new home, and the low cost is only one of the many reasons.

One thought on “10 Cheapest cities in Asia”