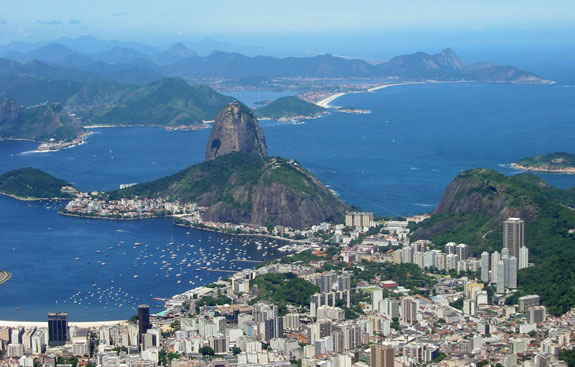 If civilization was mostly wiped out and needed to choose one spot upon which to rebuild itself, it should choose the site of Rio de Janeiro, Brazil. Simply put, it’s the most stunning location for a large city anywhere on earth. There are sandy white beaches at almost every edge along its complex coastline, and there are gorgeous rock formations at every corner, the most famous of which is the enormous dual-peaked Sugarloaf Mountain.

Rio de Janeiro is too large and complicated to be summarized properly in a Monday Escape, so we’ll hit the highlights below. It also doesn’t seem to be a terribly popular place for English-speaking expats, at least compared to its overall size. I hear many more people basing themselves in Buenos Aires, Santiago, and even Lima, but none of those can match Rio as a vacation spot.

The vibe in Rio de Janeiro

As an enormous city, it’s not surprising that Rio de Janeiro has many distinct parts. There’s the downtown area that has no beach and resembles large downtowns in other Latin American cities. Then there are all the various residential neighborhoods, which range from opulent to frighteningly impoverished. In fact, some of the posh areas are very close to the favelas (slums) in a way that you rarely see elsewhere. The last type of area in Rio are the beach-resort districts, with Copacabana and Ipanema being the most famous, and these are the areas where most tourists spend most of their time, so we’ll concentrate on those. 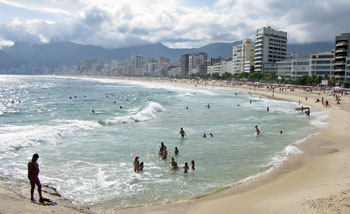 Even within these various beach districts there are usually very expensive hotel and condominium buildings lining the beaches, and even the block just behind can have a mix of businesses that cater to all classes. The rich and the poor are never far apart in Rio, but this also helps tourists find affordable accommodations in convenient areas. As long as you are willing to stay in a hotel that is 2 blocks from the magnificent beaches, you can get it for a very reasonable price.

The pace of life in the beach areas of Rio is quite slow, at least until late at night when the party people fill the clubs and bars. The most popular activity is to find a spot on the beach and sit there checking everyone else out. The beaches are so huge that there seems to be room for everyone, even on a crowded day. However, don’t go down near the water after the crowds are gone or you’ll almost certainly get robbed. No joke.

Just walking along the beach sidewalks you’ll have a little food and drink shop every 100 meters, so you can sit down and drink a cheap can of beer or some coconut water before resuming your stroll. Watch for the volleyball courts where more often than not you’ll find locals playing a football variation instead of actual volleyball.

When it’s time for dinner you’ll want to reserve at least one night for the famous churrascaria steak restaurants. You pay a rather high flat fee upon entering and then the food is available buffet-style, except for the meats which are brought from table to table on a spit just off the grill. If you want some of that particular meat or sausage you’ll indicate to the server and he’ll carve a bunch of slices onto your plate. The meat is incredibly good, but of course it’s filling so best to skip lunch that day.

The cost of living in Rio de Janeiro

All of Brazil has been known as a fairly cheap country for decades, but its rising currency has changed things a bit recently. Rio de Janeiro is still cheaper than, say, Barcelona, but not by much anymore. You’ll probably have to pay at least US$50 a night for a basic hotel room, and over $100 per night for something nice.

Fortunately, the attractions are mostly free or cheap, as long as you mainly want to hang around the beach, but the cable car up Sugarloaf is very expensive, as is the train to Christ the Redeemer. Still, they are both worth it as long as you are there.

The food and drink costs can be very reasonable if you go to the sidewalk stands and eat like the locals. Wages are still quite low on average so you can still buy a simple meal for US$3 or so, but sitting down in a sidewalk cafe will cost you closer to $10 even for lunch. These sidewalk stands are open around the clock so cheap food is always available, but a dinner in a churrascaria will probably cost US$30 or more per person, so it’s a wide range.