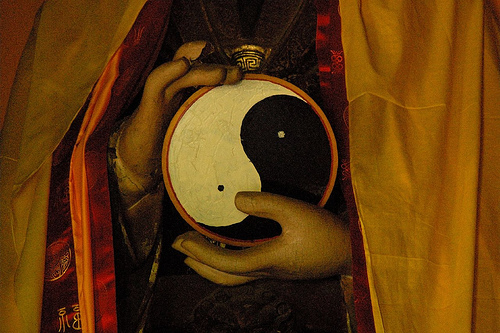 Tao, or “Dow,” can be described in English as “the path” or “the way,” but has no clear definition. It is a reference to some type of power that flows through all animate and inanimate entitles, and regulates the balance in the universe. It also recognizes the need of contrasts for balance; light and dark, man and woman, etc. The Yin Yang is a Taoist symbol.

The founder of Taoism is supposedly Lao Tse, who lived around the same time as Confucius, 604-531 BCE. However, it is not clear if Tao was actually a real person or a legend, nor a mixture of a few thinkers. Some believe he was an actual person seeking a way to avoid aspects of society like warfare, but others feel he was just mythical. Taoism began as a philosophy, but was turned into a state religion in 440 CE; it is one of the great philosophies of China along with Buddhism and Confucianism. Taoism had been oppressed during the strict communist control periods from 1949-1960, and during the cultural revolution from 1966 to 1976. Many temples and texts were destroyed. However, there is more tolerance and practice of this belief ever since 1982. There are about 20 million Taoists, mainly based in Taiwan. 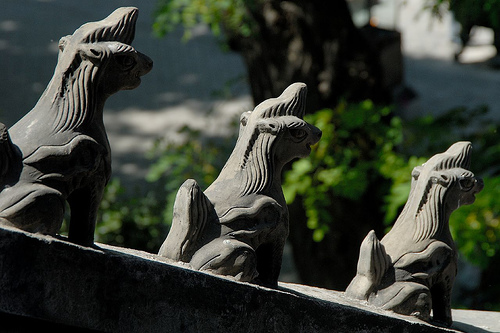 One Taoist belief is that the Tao is a force flowing through all aspects of life, and believers must harmonize themselves with this energy. It surrounds everyone, which gives everyone the chance to achieve enlightenment. They believe that time goes in a cyclical pattern, rather than linear. Health and vitality are very important to people’s lives.

Everyone must respect the air around them, as it gives them life. There are “Three Jewels” in Taosim: compassion, moderation and humility. Taoists believe that nature should have its natural flow, and you shouldn’t disturb that. Before taking actions, Taoists believe that humans should think about the consequences.

Some Taoists practice Tai Chi to maintain health. It is a practice to balance the energy flow that connects our bodies to our surroundings. It is believed to lower blood pressure and stimulate the central nervous system, as well as to loosen the tension in the muscles.

The Yin Yang symbol is a famous Taoist aspect. It represents how contrasting forces are needed to balance one another. If one becomes dominated by the other, chaos erupts.

One thought on “Taoism: Beliefs in China and Taiwan”