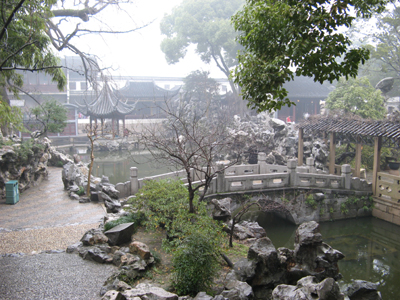 China’s tradition of beautiful garden design extends over more than 3,000 years. Historically, there were three main garden types: palace gardens, temple gardens and scholar gardens. These each had a religious or symbolic role. In addition to these main types, there are three others: the vegetable garden, the domestic courtyard, and the hunting park, although no examples of the ancient hunting parks survive.

The Humble Administrator’s Garden This garden has three parts, each with very different characteristics: The Eastern Garden, The Western Garden and The Central Garden. The Eastern Garden has beautiful pavilions; elegant bridges over clear pools and streams, small island hills creating miniature replicas of landscapes. Elegant corridors connect the pathways and pavilions. The Western Garden has the many famous pavilions and the Central Garden is designed with many scenes around the Surging Wave Pond. Within the pond three islands recreate the scenery of the fairy islands of the east sea. UNESCO declared the Humble Administrator’s Garden a World Heritage Site in 1997.

The Imperial Summer Palace This is the largest and best-preserved Imperial Garden still in existence in the world. This garden is a fascinating example of the combination of landscape and traditional Chinese art of gardening to create a harmonious, beautiful garden. UNESCO listed this garden as a World Heritage site in 1998.

Imperial Mountain Resort The Mountain Resort took 89 years to complete, beginning in 1703. A vast complex of palaces and other buildings, it covers almost 6 km², which is almost half of Chengde’s urban area. The buildings have been constructed in various architectural styles; all are sympathetic to the surrounding landscape, blending in harmoniously with lakes, pasture and forests. The 72 Scenic Spots, as named by the Kangxi and Qianlong Emperors. Are what has made the Mountain Resort most. Many of these scenic spots are copies of famous gardens in Southern China. In 1994 the Mountain Resort was added to UNESCOs list of World Heritage sites.

China has a fascinating history of beautiful garden design and there are many examples all around china of gardens worth visiting. The main areas where excellent examples of Chinese gardens can be found are Suzhou, Hangzhou and Beijing. As an expat living in China you will find these famous gardens quite busy at times, but visit them and other gardens during off peak periods and you will find quiet places for contemplation and relaxation.