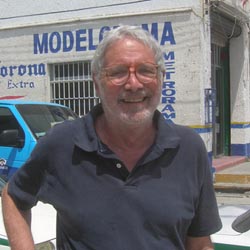 I moved to Mexico because I believe children come first and everything else is far down there on the priority list. Children come first here too. The things I saw in the commune terrified me (this was in 1970-71) and I decided that bad times were coming and it would be best to seek a safe haven.

I went back and forth over the years and then, when Reagan was elected, I was living in the penthouse at the Chelsea and people were living in the streets (something I had never seen in all my years as a kid in New York) and the subways were even more frightening than the commune.

One night in 1981, I did a Candy Jones show to promote a book and a lady called in and asked me what I thought of Ronald Reagan. A spokesman for the arms industry, I replied charitably (I thought), who will bankrupt our economy in order to enrich a few Californian Nazis. Oops. This women just went bananas. I mean she was screaming in disbelief so bad that Candy had to cut her off.

During a long station break, Candy told me that after months of complaining about a gas leak, she was sitting in her apartment and the wall blew out and a man’s head came flying into her living room, followed by a sheet of flame. She was miraculously still alive, but hadn’t yet stopped trembling. Poor Candy. Beautiful, beautiful, beautiful. Won a lawsuit against the CIA (if I remember correctly) after having been drugged and used against her will in some kind of real-life spy drama.

On my way home, as I walked down Broadway to the nearest subway, two very evil-looking men braced me in a kind of dance trap and I thought, well this is it, why did I have to do this interview, why did I have to come back to New York and everybody has to go sometime, but they were just pimps trying to steer me to a not very attractive prostitute lurking nearby.

You get the picture. If you’ve been to Cancun, you know how different it is here, if very boring. Sometimes I feel as if I’m living in a minimum security prison. Seven to life in Cancun. It’s like being married. Some days are heaven, some are hell, but when you look for an alternative…. I am hoping that being on-line will add some zest to my life.

“The reason you are unhappy in Mexico is because you have a car. Get rid of the car and you will be happy.”

Take half the clothing you think you need and twice the money.

Not really. I don’t consider myself an expatriate and I kind of resent the term, but I couldn’t tell you why. I am just someone who was born in the United States but chose to live in Mexico. I don’t have a patria to be an ex of.

I came to Mexico in 1981 to write a book called The Real Mexico. I hope to finish it this year. Something more urgent always seems to come up. As my beloved bride and I often say to each other when things take longer than expected, “We do thorough research here at Siegel and Children Third World Writing and Publishing Industries.” I have no concrete plans to move in the near future, but we would like to explore more of Mexico, especially the altiplano. We are basically beach bums. I spent time in Guadalajara and Mexico City many years ago — 1971-72 — and Anita and I lived in Oaxaca in 1982-83, but we’ve been in Cancun for more than 26 years.

Ed: Jules has a lot of irons in the fire, writing books such as Cancun User’s Guide and running his own sites including cafecancun.com and newsroom-l, a news blog focused toward journalists.

And then there’s just sitting in his living room enjoying the view, showing the gardens of the Green 16 condominium complex on Paseo Pok-Ta-Pok in the Cancun Hotel Zone overlook the golf course and Laguna Nichupté, with downtown Cancun on the horizon. That would keep me occupied for a large portion of the day. 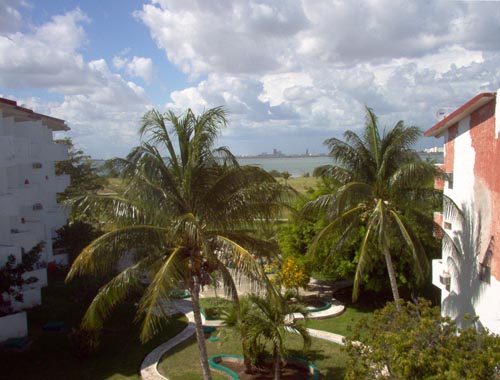 It depends on your taste. Cancun is a busy city with lots of very significant facilities such as schools, hospitals and other infrastructure. It’s not for everyone, though.

Very diffuse. If I recall correctly there are only 2000 foreigners registered with immigration as permanent residents; most are American. I believe the main socializing takes place through work and some civic organizations. I am not very social in general. Anita makes friends mostly through her yoga classes, but she hasn’t met any Americans that way.

Thank you, Jules for participating in our Expat Spotlight! We wish you success and happiness in your current location, and wherever your dreams and business endeavors take you.