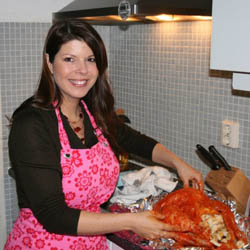 Today’s Expat Spotlight interview is Kerry O’Malley, the Webmistress of www.americanexpats.co.uk and fine art photographer in Eindhoven, The Netherlands. She still cooks American Thanksgiving dinner every year for her Dutch boyfriend, his family and their friends, as evidenced by the photo to the right.

First became an expat in 1997 when I moved to England. It was for love.

In the UK and The Netherlands.

From one of my members, whom goes by the name of ‘Sull’. She outlined phases of expat-ness. We all seem to go through phases ranging from the excitement of first arriving in a new country to realizing just how difficult it is to be outside of our home country, home sickness, loving everything new, hating everything new. It reminded me that it was really ok to feel what I do as an expat. It is a very unique experience.

Try to be flexible and remember that it’s never going to be exactly like where you came from. Your new country may never feel like ‘home’ but it is what you make of it. Be positive!

I do work but found that I’m doing the job that I least like as an expat. I’m a professional photographer and I’m finding it nearly impossible to find work here so I work as an Administrative Assistant.

I still take photos as a hobby now with the dream of one day earning money at photography again. I was last a paid photographer in America at Apple Computer in California. 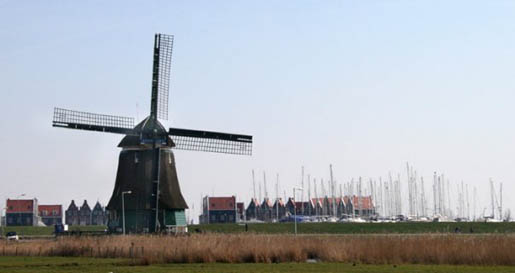 I also run and maintain www.americanexpats.co.uk. When I moved to the UK, I found it frustrating to get all the information I needed as an expat. Was my U.S. driving license valid? (turns out it was only good for 1 year in the UK). How could I legally live in the UK? Where could I find pumpkin pie in a can? The Yellow Pages didn’t have this information and at that time, neither did the internet. At least not in one central site. That’s when I started American Expats In The UK. I was also homesick and looking for others to share expat experiences and generally vent to.

The site has been online since 2001 and is an invaluable resource for Americans planning to make a move to the UK or already living in the UK. We have a forum where members share information on what the best schools are for their children, how to use the services of the NHS (National Health Service), and every other subject you can imagine!

I left the UK in 2002 but believed so much in the positivity of what the forum was doing that I didn’t want to stop it for all who were using it as a resource. It’s still going strong after 8 years now!

I have studied the Dutch language for 3 years now and am not anywhere near fluent. It’s an incredibly difficult language, but I’ve found that it’s useful to know living here even if a large portion of the population does speak English. Reading street signs. Listening to breaking news. It all helps!

Yes, but you have to be flexible. Most Dutch do speak English but their way of life / culture is quite different. They can be very direct and at times it can be mistaken for rudeness.

Relatively quiet. Although, I admit that I’ve only sought out other expats on two occasions since moving here.

Thank you, Kerry for participating in our Expat Spotlight! We wish you success and happiness in your current location, and wherever your dreams and business endeavors take you.