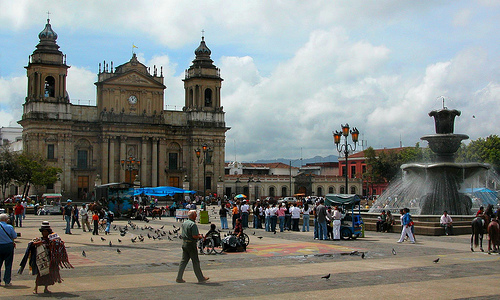 Guatemala City is the capital and largest city in the country, as well as the largest city in Central America and the Caribbean. Its population is around 940,000, and the metro area is over 2 million. It is a diverse city, as most of the population is Mestizo (a combination of Spanish and native), while there are also some German, Jewish and Korean minorities.

Guatemala City has been expanding rapidly in the past few decades, so there are problems with pollution and having an existing infrastructure that does not hold the capacity. Though located in a tropical area, Guatemala City is high up in the mountains, so the weather is pleasant almost year round, except for the rainy season from May to October. The city is a mix of new and old, having ruins from the ancient Mayan city of Kaminaljuyu, contrasted by modern freeways, financial areas, hotels and shopping centers. There is some culture in Guatemala City, including several art galleries, theaters, culture centers, a historic center and sports centers. Natural disasters are a problem for residents of Guatemala City, including risks of earthquakes, mudslides, sinkholes and volcanic eruptions. The city has a fairly developed bus transit system to get around.

Quetzaltenango is the second most populated Guatemalan city, with around 300,000 inhabitants. It is usually referred to as its indigenous name, Xelaju, or just Xela. Its population is about 65% indigenous as well, the remainder being Mestizo or of European background. The weather there is mostly warm year-round, with a dry season and a rainy season. There is no official government transit system in Quetzaltenango, but a network of private micro buses. Many people who live here use bikes to get around, even to go out into the countryside. This city has become popular amongst foreign students to come learn Spanish and/or Mayan. 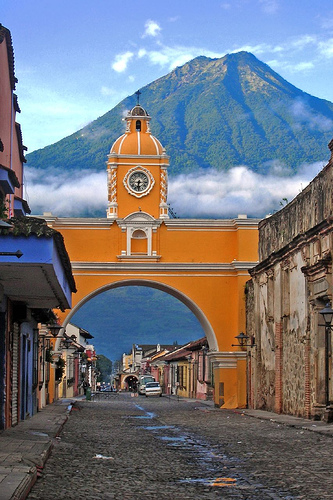 Antigua is a city located in Guatemala’s Central Highlands. It has an abundance of Spanish Baroque architecture, and is a UNESCO World Heritage Site. It is a small city with around 30,000 people. Antigua is centered around its Central Park, which has a fountain and some nice architecture around its premises. They have very festive celebrations around Christian holidays, like Lent and Easter, where the streets are lined with dyed sawdust, vegetables and flowers. It has become an expat destination for retired people of the US and Europe, and many students come to Antigua to learn Spanish.