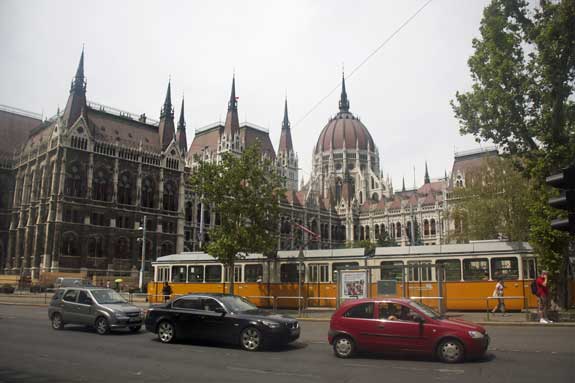 While its architecture might not be as interesting as its most famous buildings suggest, Budapest is still a handsome city and one that should be on everyone’s list. One thing it’s important to realize is that Budapest was yet another city that was largely demolished during WWII, and most of its central city was rebuilt in the decades to follow, in a way that will look very familiar to people who’ve traveled extensively in Europe already.

The city does have plenty to recommend, and a few rather unique appeals, most notably its mineral baths that are affordable enough for regular locals to use on a weekly basis. Taking a “spa” holiday normally means paying a fortune, but in Budapest, many locals treat the hot spring complexes as a regular indulgence.

The vibe in Budapest

You may know that Budapest consists of the Buda section on one side of the Danube, and the Pest section on the other. Except for the remnants of the castle and a small old town section that is interesting, most of what visitors will be doing is on the larger and more modern Pest side.

The Pest side rolls back from the river in a standard grid, and it can feel like a bit of a concrete jungle unless you are in one of the grand squares in key parts of the city. In other words, it feels much more like Manhattan in New York or a Paris with fewer decorations than you might expect.

In spite of being such a popular tourist city, Budapest residents are not known for knowing much English, so getting advice for the whole day from your hotel is something to consider.

The food is notable for using paprika as a key spice in many things, and portions tend to be hearty if you go to a place that is serving Hungarian food. So many tourists come for goulash (which is a thin soup with meat and veg in it in Hungary) that you can find it pretty much at every tourist-oriented restaurant, regardless of the rest of the menu.

One aspect of Budapest that isn’t as famous as it should be is its nightlife, which is very cutting edge while still being cheap and accessible. In so many cities that evenings revolve around Irish-style pubs, and there are plenty of those in Budapest as well, but the locals tend to go to what are known as “ruin pubs” that are located in the interior courtyards of many old buildings in the old Jewish Quarter.

Evidently they started out as informal, or perhaps even illegal, watering holes, so they tend to be decorated in kitschy and/or minimalist styles, each different from the next. Some are large enough that there is a band playing in one area and a dance floor in another with a restaurant in another. Fortunately, they rarely charge admission, and drinks are quite cheap by most standards, so it’s easy to try several until you find the one that fits your style the best.

The cost of things in Budapest

Being part of the former eastern Europe, Budapest is relatively cheap compared to cities like Paris or Rome, although it has plenty of upscale and 5-star options and those can be quite pricey, of course. Finding a simple hotel room for US$30 per night won’t be difficult, but US$50 per night is probably a better target for one with a good location in the high season.

Partly because English isn’t widely spoken, the restaurants with English signs and menus tend to charge more than those aimed at locals. In other words, if you look for something familiar, you’ll probably be paying at least US$6 or more for even a basic lunch, and it goes way up from there. However, if you are bold enough to go into one of the cafeterias where locals go, you can get a similar meal for US$3 or a bit more. For a dinner at a sidewalk restaurant in the tourist district you’ll probably be paying at least US$12 for a soup and cheaper main course, or well over that for a fancier place or a hotel. The good deals are well hidden.

Drinks are quite a bargain, with a half liter of beer available for under US$2 in all but the fancier places, and local wines and spirits starting just a bit higher. You can spend a few hours in one of the hot spring facilities for well under US$10, so you can treat yourself well and still stay on a low budget if that’s your goal.