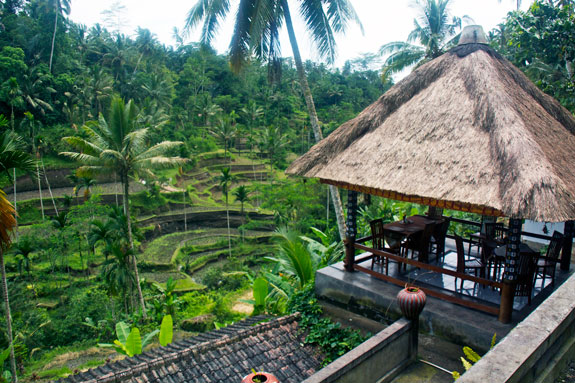 This week’s Monday Escape destination is easily one of the most beautiful places in Asia, but I can’t dispute that it’s suffering a bit from its own popularity to some degree at the same time. Ubud is one of the few tourist destinations in Bali that isn’t on a beach. It’s still considered an “artist community” in the hills on the way up the mountain from the popular beach resort areas of Kuta, Sanur, and Nusa Dua.

Recently having spent almost a month there, which was my first visit since 1998, it’s impossible not to have mixed feelings about the place. On my previous trip it seemed like there were perhaps 20 shops and 15 restaurants clustered around the central art market and soccer field, while today it’s got to be at least 200 shops (including plenty of chains) and at least 100 restaurants sprawling out from the center of town where the central art market is almost forgotten. Still, the place is wonderful.

The vibe in Ubud 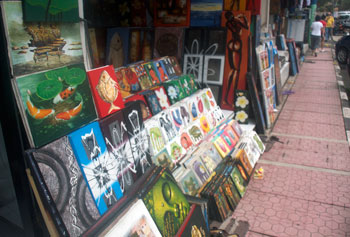 As mentioned, Ubud is considered an artists’ community, but that’s really barely noticeable these days, as the retail side of things dominates in a huge way. Nearly all of Bali is one big artist community anyway, so Ubud doesn’t have great significance with this title. Nevertheless, there are countless galleries and craft shops all over town, so the feeling remains to some degree.

Aside from the art, this is definitely a sprawling tourist town, with storefronts that now stretch solid for nearly one kilometer in every direction from the center. Among them are plenty of trendy clothing shops, but also many traditional craft shops and excellent restaurants.

Traffic between towns can be disheartening these days, but since each road in Ubud is only one lane in each direction, there’s never the sense of walking along a busy highway. In fact, most of the time there are few cars plowing through the city center, so it maintains something of a peaceful feeling in spite of the crowds of people all around.

The popularity doesn’t take away from the relaxing nature of the place either. The restaurants are all small and are rarely overly crowded, and there are a multitude of massage and spa treatment places through the area. Parts of Eat, Pray, Love were based and filmed in the Ubud area, including the famous Monkey Forest that sits at the southern edge of town.

Perhaps the most distinctive part of Ubud is the fact that there are stunning rice terraces just a short walk from the absolute center of town, and among the world’s most beautiful rice terraces just a short drive away. Ubud has about one thousand taxi drivers available at any time of night or day, so just ask any of them for a cheap trip to the ones a few kilometers out of town, and you won’t regret it.

The cost of living in Ubud

All of Bali has gotten more expensive in recent years, but it’s still an amazing bargain by almost anyone’s standards. Hotel rooms in Ubud start at under US$10 per night, and for around US$15 per night you’ll likely get air conditioning and a pool. Those willing to pay more can find luxury in any price range on the way up.

A meal at a restaurant will start at around US$2 for nasi goreng (rice and chicken) and even pizzas and pasta dishes are usually under US$5 as long as you avoid the fanciest places and hotel restaurants. A big bottle of Bintang beer will cost around US$3 at most places, with spirits starting at only a little more.