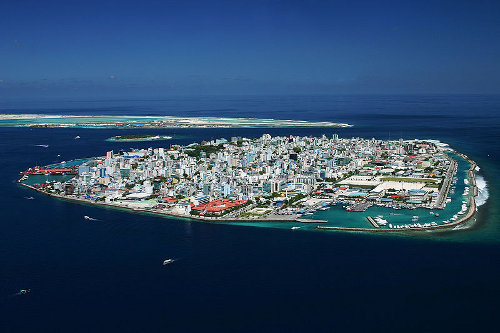 Is your idea of a dream expat escape a remote tropical island, but not so isolated from the luxuries and benefits of living in a large, culturally diverse, international city? Malé might be the perfect place for you.

Located among the tiny tropical atolls of the Maldives Islands in the Indian Ocean, Malé still boasts a bustling population of just over 100,000. The island’s landmass is entirely urbanized, as the picture shows, but there is ready access to many of the nation’s other 250 inhabited islands via seaplane and boat.

Understandably, the nation is a popular tourist destination, and in fact tourism is its most lucrative industry. For the expat, that means there’s a constant international atmosphere. A recent census estimated as many as 70,000 foreign employees living on the islands, out of a total population of around 300,000. At the same time, though, the Maldivian racial and ethnic identity is a blend of cultures which still strongly reflect the people who first settled the islands from southern India and Sri Lanka.

Originally the island was predominantly Buddhist, although that influence has now been replaced with a strong Muslim presence. Local businesses are required to close temporarily several times a day for Prayer Call. You can get the times each day by texting ‘prayer’ to +131 on your mobile. Fridays are the holy day of the week– as it ought to be!– so most services are closed then too.

If you’re a lover of seafood, get ready to enter your personal culinary paradise.

As for activities, if you enjoy the ocean it’ll be within view from every angle. Fishing, snorkeling and diving are stellar, and the island’s many reefs are regularly visited by spectacular (and entirely peaceful) whale sharks!

The nation’s president, Maumoon Abdul Gayoom has pledged to make the islands carbon-neutral within the next decade, and they plan to do so by moving to a system entirely powered by wind and solar power.

You can network with current and future expats of Maldives at expat-blog.com’s Maldives expat network.