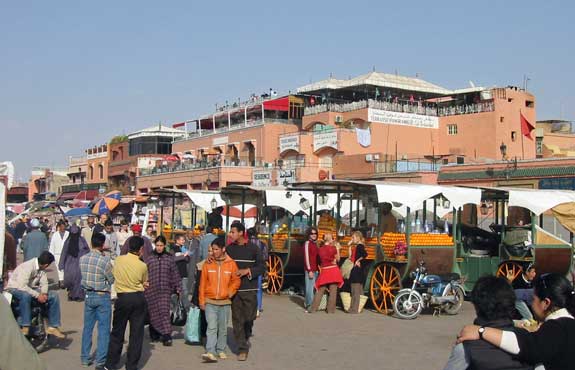 The name alone conjures up exotic images of a mysterious northern African city, and the reality delivers once you arrive, though only if you go to the historic city center. Marrakech, like many other large cities in Morocco, is sort of two cities in one, with a partly ramshackle medina at its heart and a fairly modern city surrounding that.

While it’s true that Marrakech isn’t really a hop spot for expats in general, it’s a very popular place with tourists and long term travelers. The city is quite cheap compared to Europe and filled with surprises so it’s on the list of nearly anyone even considering going through this part of the world.

The vibe in Marrakech 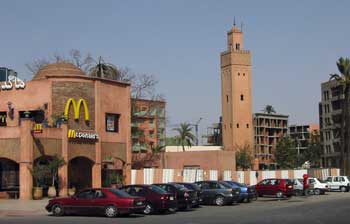 Again, the city is sort of two in one, even for the tourist. There are hundreds of hotels and guesthouses in the Medina (old city), but most of the nicer accommodation is located in the New City, just at the edge of the Medina. The New City resembles Scottsdale, Arizona in many ways, with modern (and matching) strip-mall looking shopping centers lining the streets, including a few branches of McDonalds that are styled to blend in.

But the main reason to visit Marrakech is the Old City, which has the massive Djemaa el Fna Square at its doorstep. The city behind the square is a maze of souks (market places) each specializing in one particular kind of item. One area has carpets while another has hookah pipes and another sells meat or spices or plumbing fixtures or pirated DVDs and so forth. It’s almost impossible not to get lost once you get deep in the place, but it’s also easy to find your way out again if you follow the main flow of foot traffic generally in the direction you came.

It’s fascinating to see that the abundant souvenir shops are neighboring stalls that sell kitchen appliances or cheap athletic shoes. This is really where locals shop for many of their day to day goods, so it’s quite a different feeling from, say, stepping off a cruise ship into a complex that is 100% dedicated to tourists.

The Djemaa el Fna square itself is a huge draw. This giant open area is mostly empty during the day, dotted with snake charmers and dancers and others trying to raise a bit of money from tourists, but at night it becomes a huge open-air food court that is one of the most famous of its kind in the world.

You’ll find hundreds of stalls that feature every imaginable kind of dish, from grilled meats to veggie dishes to soups to desserts and everything in between. There are benches and tables near every stall so you don’t have to eat standing up. Those in town for only a few days might be best off sampling some smaller dishes from multiple stalls to really get more out of the experience. There are goat’s heads and a few other things that some may not be tempted by, but those are almost all easily spotted from a distance, so there isn’t much downside to sampling whatever looks good as you walk by.

The costs in Marrakech

Many people get to Morocco from Spain, which is already one of the cheapest corners of Europe, and the good news is that things in Morocco tend to be quite a bit cheaper than even in Spain. Hotels start at around US$10 per night, though you’ll need to spend two or three times that much for something that will live up to European standards. There are wonderful boutique hotels with fancy rooms for under $100 per night, similar to rooms that would cost twice that much in, say, Madrid.

The food in Marrakech is quite a bargain as well, as long as you stick with the popular dishes among the locals. The tajine is kind of a stew famous in Morocco, and even in a touristy place you’ll be filled up for around US$5, or half that if you follow the locals around the corner. There are many very fancy restaurants in Marrakech with prices geared toward European tourists, but budget travelers can find sandwiches and such on the side streets of the market area where a meal for US$3 is easy.

Drinking in Marrakech gets a bit tricky since there are almost no bars in the Old City, and not many in the New City either. Prices of beer and local wine are still cheaper than in most of Europe, but only by a bit.