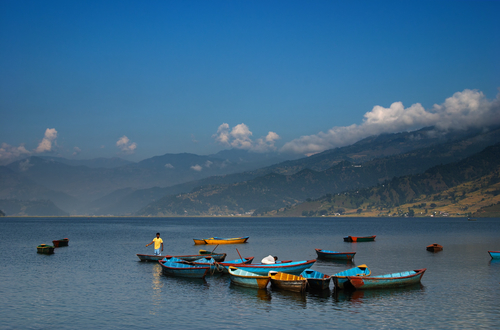 Pokhara is the third largest city in Nepal, and it is considered by many to be the most beautiful place in the world.

Situated next to Phewa Lake and cradled in the northwestern corner of the Pokhara Valley, in no other place do mountains rise so quickly. Within the 30 km area, the elevation rises from 1,000 m to over 7,500 m. That breathtaking rise has been the muse for spiritual inspiration and nature loving adventure seekers from around the world.

The city also has a great live music scene, with plenty of eccentric bars and hotels, and a thriving nightlife scene. It’s no wonder it is fast becoming the destination of choice in Nepal for travelers and expats alike.

The climate is sub-tropical, but due to the elevation the temperatures are moderate: the summer temperatures average between 25–35 °C, in winter around 5–15 °C. So although you may think of cold weather when you think of Nepal, think again.

Aside from being a destination for mountain trekkers (about half of all tourists visiting Pokhara are there for the start or end of a trek to the Annapurna Base Camp and Mustang), there are also plenty of mountain lakes, majestic waterfalls and raging scenic rivers to enjoy too.

Lying at the center of an important old trading route between Tibet and India, Pokhara has a deep rooted history as a crossroads for travelers. In fact, until the end of the 1960s the town was only accesible by foot and it was considered even more a mystical place than Kathmandu. Many of the mountains around Pokhara still have medieval ruins worth checking out as well.

Temples worth visiting in the older part of town are Bindhyabasini temple and Bhimsen temple. Another temple, Barahi temple, is located on an island in the Phewa lake, accessible only by boats. Meanwhile, the best viewpoint of Pokhara is Sarangkot (1,600 m) and Thulakot (in Lekhnath a part of famous Royal Trek from where four lakes Phewa, Begnas, Khaste and Dipang and whole Annapurna range can be seen) to the west of the city. It’s a can’t miss hike, sure to entice any apprehensive aspiring expats.

Getting around town isn’t too difficult either, with several bus routes mostly running from north to south. Getting in and out of town can be done at Pokhara Airport, situated in the middle of town, which offers flights to Kathmandu, Jomsom, Manang, Bhairahawa (Siddhartanagar) and Bharatpur. Helicopters to Manang and Jomsom are also available for charter.

All in all, it’s everything an expat needs. Get there soon before the rest of the world discovers this incredible city en masse. See for yourself whether it truly is the most beautiful city on Earth!