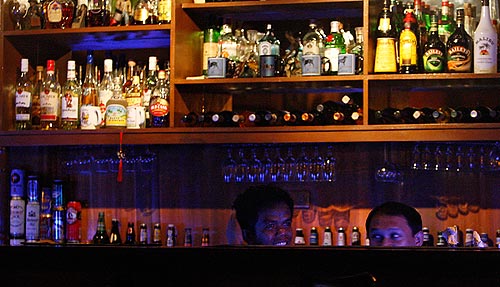 A bar owned by a U.S. expat in downtown Manila, called the “Hobbit House”, offers employment, entertainment and hope to downtrodden dwarves from throughout the Philippines.

The Houston Chronicle has the story here:

He considers them family, but they’re not his children. They’re the dwarfs and other little people the 70-year-old Iowa native, [Jim Turner], has rescued from the heartless streets of this capital city to offer them friendship and honest work.

For 35 years, the former Peace Corps volunteer has operated the Hobbit House, a bar themed on J.R.R. Tolkien’s fantasy novels, a realm marked by all things miniature.

Under his care, hundreds of dwarfs have adopted new cultural identities. They’re no longer shunned or even feared as supposed evil spirits, but have become popular characters called hobbits — merry figures who serve drinks, crack ribald jokes and even entertain onstage.

There’s even one midget Elvis impersonator.

Naturally, Turner has had his share of disapproval from critics. After all, isn’t casting dwarves as hobbits for a themed bar exploitive in its own right? While being a merry hobbit may be favorable to being considered an evil spirit, isn’t this still reinforcing fictional stereotypes which continue to marginalize little people?

Turner scoffs at such accusations: “We took many from the worst slums in Manila, where they were mocked and ridiculed,” he says. “Now they’re no longer carnival freaks. They’re respected entertainers and businesspeople.”

Regardless of what anyone might think, there’s no doubt as to who Turner’s biggest supporters are: the little people themselves. He does more than just offer them employment; he pays their tuition and loans, defends them from ridicule and gives them public legitimacy; perhaps most importantly, he gives them a chance to earn their own self-respect. And he treats them as equals too. Several years ago he handed over ownership of the ‘Hobbit House’ itself to the little people who work there.

All in all, the story is a good example as to how expats can have positive impacts, and in unexpected ways. Living abroad can open up any number of creative avenues which can steer your life down adventurous, unconventional channels, and which can allow you to help others who have been less fortunate.

Most importantly, becoming an expat can make you more appreciative of your own opportunities in life. Speaking from his own unique, eccentric cultural experience living among Filipino dwarves: “You see the hurdles they scale, and you realize that no matter how many problems you have, if you’re average size in this world, you’ve got the game half-won.”

In what exotic place will you find your own heart?

If you’re interested in reading more about Turner and the Hobbit House, check out the full article here.

One thought on “U.S. Expat’s ‘Hobbit Bar’ Does Good for Filipino Dwarves”