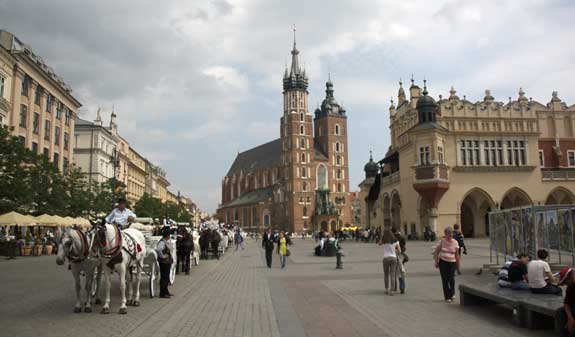 One important factor that divides European cities into two main categories is whether they were bombed down to rubble during World War II or not. Most of the cities that sustained massive bombing damage were rebuilt in the same decade and they tend to look the same. Krakow, for the most part, is a big exception to this in spite of its central location during the conflict.

In other words, the central part of Krakow is still loaded with historic buildings and churches, and its design in general makes it one of the most pleasant town centers in all of Europe. On top of all of this, Krakow is one of the cheapest major cities on the continent, so it’s a place you should go soon if possible.

The vibe in Krakow

With a design that is nearly perfect for tourists, the medieval town center is about 8 square blocks with a huge open square in the center, but it’s also surrounded by lush park areas where the old town walls used to be. For this reason the center is very calm with almost no car traffic, even though it’s dense with hotels and restaurants and bars.

The main square itself has a market building in the middle which sort of breaks it into two squares, and nearly the entire thing is lined with cafes and restaurants. When the weather is pleasant it’s perfect for a long lunch or dinner where the entertainment continually passes by you as you eat.

There are also cathedrals and statues and fountains everywhere you look so it’s almost an overload for the senses, yet it never seems nearly as crowded as it could be because Krakow is still a bit off the beaten path. The Free Krakow Walking Tour is a perfect way to see the city center and then the impressive Wawel Castle at the end of the tour.

Of course many people visit Auschwitz during a trip to Krakow, done best by a half-day guided tour by bus. There is also a salt mine attraction just outside the city that is also very popular with tourists, but there is plenty to see and do even if you skip both of those.

A few hundred meters down a road outside of the city center and you’ll reach the old Jewish Quarter, which has its own distinctive look and is now the center of nightlife and many interesting restaurants. Even with many British stag parties descending on Krakow, you are most likely to be mingling with locals in the Jewish district because the ratio of tourists is still quite low.

The food is quite heavy if you stick to the local specialties, and this is a big plus for many people, but even vegetarians should have no problem finding things they’ll like at very good prices.

The cost of things in Krakow

As mentioned before, Krakow is one of the cheapest cities in Europe, so it’s a bit surprising that it’s as lovely as it is. Most hotels will include breakfast with the room, which will normally consist of breads and meats and cheeses in addition to yogurt and cereal.

If you sit down at one of the cafe restaurants that lines the city square you will probably pay US$10 for a salad and a main course, but only about half that price if you go a couple of blocks away.

A half liter of beer will cost around US$1.50 at most places, with wine and cocktails only a bit more, but if you drink on the town square you might pay double that, which is still quite a good deal by international standards.