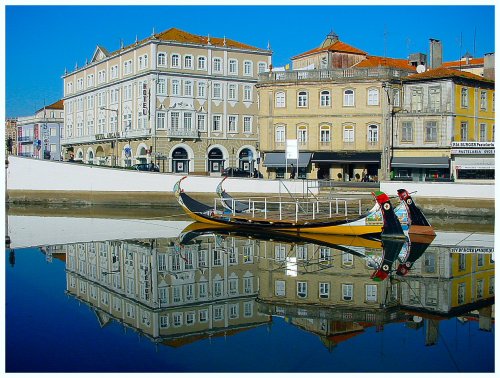 Aveiro is known as the Portuguese “Venice” due to its many canals, bridges and painted boats called “moliceiros”. But unlike its Italian counterpart, this city is far more personal, less bathed in swarms of tourists and relatively uncrowded.

The city of Aveiro has a population of approximately 57,000 inhabitants, where 14,000 are students at University of Aveiro, one of the most important Portuguiese Universities. That gives this city a youthful vibrance and an intellectual pulse.

Aveiro is situated 68 km to the south of Porto and 58 km north of Coimbra, straddling the “ria” Aveiro and the river Vouga a few kilometers from the Atlantic Ocean, where you can easily reach by car (5 minutes) or by bus (every hour). And that Atlantic coast is one of Aveiro’s most charming lures, known as the Silver Coast due to its beautiful and clean beaches. Be sure to check out the fantastic sandy beaches of São Jacinto, Barra and Costa Nova.

The city is also a great place to get around by bike– with the canals and beautiful paths and bridges you won’t want to bring your car here. It’s a particularly good way to get around while shopping around Forum Aveiro, the central market.

Aveiro is known in Portugal for its traditional sweets, the ovos-moles and the trouxas de ovos, both made from eggs. And if you have a saltier tongue, be sure to purchase some salt from the nearby salt flats.

The city is also famous for the Convento de Jesus (now known as the City Museum “Santa Joana”), built in the 15th century, which contains the tomb of the daughter of Afonso V, St. Joana, who died in 1490. The presence of this royal personage, beautified in 1673, proved to be of great benefit when she bequeathed her valuable estate to the convent. In the 17th and 18th centuries, the convent housed a school of embroidery, which produced many of the sumptuous pieces kept in the museum.

All in all, Aveiro is the perfect place to kick back in peace with beautiful surroundings, enjoy the beach on the weekends, and indulge in the good life. You can’t go wrong in Aveiro!