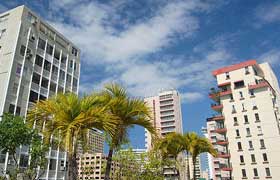 It’s true that most people like to head to the Caribbean in December or January, and that’s exactly why it can be much cheaper to visit a bit later in the season. Right now you can get excellent airfares to many Caribbean destinations, plus great hotel bargains when you get there.

Right now you can get a flight from New York to San Juan, Puerto Rico for as low as US$170 round-trip. For most dates you’ll find the lowest prices are around US$245 round-trip, but this is still very cheap for such a long flight. From other US cities it’s probably a bit more expensive, but not by too much. American Airlines and Delta Airlines both have frequent flights into San Juan, so if you live near an airport served by either of those you are probably in good shape.

For Americans in particular it’s nice to go to Puerto Rico since you won’t even need a passport, and you won’t have the hassle of going through Customs inspections. Knowing Spanish will definitely help, but even if you don’t you’ll be just fine speaking only in English.

The weather in Puerto Rico is just about perfect until summer when the rainy season begins, so a holiday in March or April is still ideal. The cheapest flights are into the large airport just outside of San Juan, and there are many hotel options within a close range of San Juan as well.

The historic old city center of San Juan is worth a visit on its own, but most people prefer to stay in larger beach hotels outside the city. You can find everything from simple 2-star hotels a few blocks from the beach up through 4-star deluxe hotels, many of them all-inclusive, right on a beautiful stretch of sand.

The hotels in Puerto Rico aren’t quite as cheap as those in parts of the Dominican Republic or Jamaica, and certainly not as cheap as Cancun, but still you get a real island feeling there in a safe environment. Hotel deals toward the end of the season can also be fantastic, with places that charge $150 per night in January down below $100 per night in March, and even cheaper in April.

You can also go to other areas of Puerto Rico for a different experience. The area known as Rincon (corner) in the northwest of the island is home to the best surfing in the Caribbean, and many long-term residents and those who come for a month or more at a time.

Even during summer you’ll find far less rain than you might fear, and the chances of being in the path of a hurricane are way less than 1,000 to one on any given week you are there. If you get unlucky you’ll know many days in advance, with plenty of time to fly out, so the risk is pretty much zero in spite of the hype.