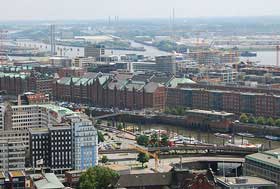 Thanks to new taxes and fuel surcharges, flights between the United States and Europe are looking very expensive this summer. But there are a few sales here and there that are very attractive and one such sale is to Germany at the moment. We’ve seen flights between New York and Frankfurt at US$470 round-trip lately, with a similar price to Dusseldorf.

That’s actually about $200 cheaper than flights to London, which is the usual cheapest European city (not including Ireland), and about $100 cheaper than flights to Amsterdam, which is also a pretty good price at the moment. As we always discuss, if you are flexible about where you land and the first and last days of your trip, you can often get a free bonus stay because you can save on airfare.

Many American and Canadian tourists skip Germany because it’s not as sexy of a destination compared to France or Italy, and it’s not as easy as going to the UK. However, you won’t meet many people who’ve explored Germany and then later regret it. It’s filled with charm and excellent food, and most things are surprisingly easy even for those who don’t speak the language.

The Frankfurt airport is the largest in the country, so it might surprise you to learn that the city of Frankfurt isn’t much of an attraction itself. It’s more the banking and business capital, and it has a central location in the western part of the country, so it has the momentum being the base of Lufthansa Airlines.

Frankfurt isn’t really worth staying in for a night if you can avoid, and and unless you fly in late at night (which you won’t because most flights land in the morning) you can hop on a train right from the airport and be in almost any other German city within a few hours. Berlin is not close, but you can be in Munich or Cologne or Hamburg pretty quickly, not to mention some of the smaller towns that are worth exploring.

With airfares this low you can fly into a German city and then take a train to, say, Rothenburg (a gorgeous mediaeval town) for a night, and then take another train to Paris the following afternoon. The whole thing will cost less than flying into Paris itself at the moment, so you can think of the Germany portion of your trip as being a free bonus, and a good way to get over the jetlag before you get to a more expensive place like Paris or Vienna.

Sometimes the best sale prices are to Amsterdam or to Paris or even to Rome, so it’s worth checking prices into the other major airports to see if one is cheaper by quite a bit, and you might just be able to pull off a free extra little holiday with the money you save.