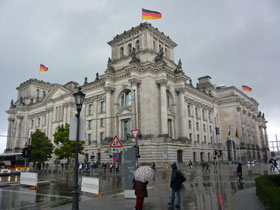 At least for those starting in North America, one of the constant conundrums has been that it always costs a couple hundred dollars more to fly to the cheaper countries in Eastern Europe compared to the more expensive countries in Western Europe. In fact, flights to London are usually cheapest of all, and London is also one of Europe’s most expensive cities, so it’s kind of a cruel joke.

Well, at the moment there is some very good news on that front, and this situation probably won’t last too long so it’s worth jumping on quickly if you have time off in the coming months. And unfortunately, by the time December rolls around these cheap Eastern cities will all be too cold to really enjoy, so the window is not a long one.

I always prefer to check airfares to Europe starting in New York City, since that is almost always the cheapest departure point, and you can just add an extra $100 to $200 to that price depending on your actual starting point.

While not technically in Eastern Europe, flights to Istanbul are very cheap at the moment, with $540 round-trip fares from New York City. Normally you’d expect to pay at least $700 for this flight, so you get a cheap fare to a cheap destination at the same time.

You can also fly to Krakow, Poland from New York for $500 round-trip at the moment, which is an amazing deal considering that Krakow is a relatively minor airport for long-haul flights. Krakow is also perhaps the best bargain in all of Europe right now in terms of hotel, food, and entertainment prices once you get there. You’ll honestly be able to get by on around $50 per person if traveling in a couple and sharing a 3-star hotel room. In London or Paris you’ll be spending about triple that for the same things, so take this cheap flight and make the best of it.

Flights to Berlin are also $500 round-trip from New York right now, which is another deal to strongly consider if you are a budget traveler. Berlin is an amazing city that also happens to be very cheap by Western European standards, so to be able to take a cheap flight directly there without having to spend a few days in a far more expensive city along the way can make for an excellent value.

Lastly for now is Kastrup, Denmark, which is fairly close to Copenhagen and also has flights for $500 round-trip right now. The difference here is that Denmark is very expensive once you arrive so it won’t be a cheap trip overall. But on the other hand, Denmark is a wonderful place to visit and home to some friendly and beautiful people, so you might as well schedule a trip there when at least flights are cheap, instead of when nothing is cheap.