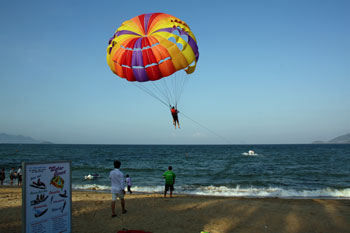 By now you all know that I’m constantly on the lookout for bargains that stand out from the rest, and today I’ve found one that I can barely believe myself it’s so good. Normally you’d expect to pay at least $500 round-trip between New York or Los Angeles and Costa Rica, even during the low season (rainy season), but right now you can book flights for under $300 round trip.

Don’t want to go there when it’s raining all the time, you say? Well, the good news is that these flights are starting in November, which is the first month of the perfect weather season down there. Starting in December and into March the country is packed, but since not many people are ready to do their winter trip in November the prices are astonishing.

Another interesting thing about this deal is that it’s only offered into the smaller airport in the northwestern city of Libera, Costa Rica, rather than into the large airport in the capital of San Jose. It turns out that this is good news as well, since Liberia is actually mainly there to serve the resorts in the north of the country, which have become extremely popular with Americans and Canadians in recent years.

Most of Costa Rica is a mix of national parks, surf towns, and a volcano or two, but the northwestern part is home to to Pacific Coast beaches such as Playa del Coco, Playa Hermosa, Playa Tamarindo and the Papagayo Peninsula. These are lined with newer resorts that don’t show the age of some of the towns that have been popular for a long time.

Costa Rica is small enough that you can easily take a rented car or luxury bus into San Jose or to the Arenal volcano area if you want to mix things up, but for most people just to stay in the most desirable part of the country during November should be enough.

Resorts are cheap then as well

The news just keeps getting better and better since not only does the perfect weather arrive in November, but the big resorts are still charging much less than they’ll be able to around Christmas and into February. You might find a 4-star beach resort with rooms for around $80 per night in November, which will be charging $150 per night around Christmas.

Costa Rica and all of Central America are popular for Americans and Canadians because they have their perfect stretch of 5 months of weather when it’s freezing in Toronto, Chicago, and Boston. The trick to saving money is to be one of the first to go on a trip.

If you go in November and combine a cheap flight and a cheap hotel, you’ll probably be able to afford another combination of the exact same thing toward the end of March when prices are coming down again. People who go around Christmas will spend as much on one trip as you’ll spend on two. Not too shabby.