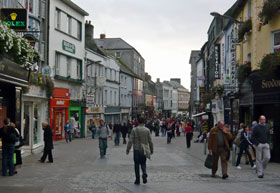 As mentioned recently, prices for flights from the US to Europe are still strangely high in January, with a few notable exceptions. Typically London is the cheapest city to reach from nearly anywhere in the United States, but right now it’s not even close to being the cheapest.

However, cities in Ireland are much cheaper so you can actually save money flying into that country even if it’s not your final destination. Interestingly, you can fly into Paris from New York for only $410 right now, and into Prague for only $400 right now, but in both cases it’s much more complicated to fly onto another destination from there because there are fewer destinations served by low-cost airlines using the same airports.

We’ve discussed a few times that visiting Ireland is a wonderful pleasure unto itself, and even that visiting in the off season is a good idea for many people. But today we’ll discuss using the two main airports in Ireland to get elsewhere in Europe and save money in the process.

Both Dublin Airport and Shannon Airport are served by a variety of low-cost carriers, including RyanAir, so you can get almost anywhere in Europe in one cheap stop from either airport. Flights into both are starting at just over $400 right now, so it’s an ideal stopover considering it’s also closest to North America.

You may not realize that these low-cost airlines almost always start their fares very low and then slowly raise them as seats on each plane fill up. So let’s say you want to fly to Amsterdam two months from now. First go onto the websites of the discount carriers to see what fares from the Irish airports are into Amsterdam on the day you want to arrive. Very likely you’ll find that fares are starting well under €50 each way, and possibly much less.

So needless to say, if you can get a round-trip flight from the United States into Dublin for $450 and then a RT from Dublin to Amsterdam and back for only $100, then it’s a big savings compared to paying $700 for the Amsterdam flight itself.

If you can save a couple hundred dollars or more then it could be worthwhile, so it’s easily worth a few minutes to research it. But if the savings are minimal then it could be too risky. The problem you could encounter is that if your flight into Dublin was delayed you could miss your flight onto Amsterdam and you’d be stuck with the loss (although many airlines will honor tickets like this anyway if they can).

And similarly, if the flight back from Amsterdam to Dublin is late you could miss your flight home, which would be worse. The good news is that Ireland isn’t known for flight delays, even during winter, and that most overseas overnight flights to Europe land early rather than late, but it’s still a risk that isn’t worth it unless the savings are big enough to match.