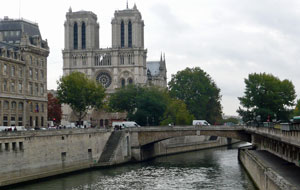 It’s getting harder and harder to find airfare deals at the moment due to the fuel surcharges and new taxes and fees being added lately, but at least there’s a little bit of good news for those wanting to fly to Europe in the coming months. Recently I’ve been featuring some alternate destinations like Madrid or Berlin as entry points to Europe, but let’s face it, most people want to fly into Paris if they are going to the continent at all.

Fortunately airfares to Paris seem to be on sale at the moment, with the cheapest round-trip between New York and Paris starting at only $560. The cheapest flights to London are $730 and to Rome they are $650, just to give you a comparison as to why this is such a good deal. Needless to say, if you are starting from cities other than New York you’ll probably be paying a bit more, but you’ll still find a sale price.

The cheap flights to Paris make for an ideal situation in the months before summer because the city actually has reasonably priced hotel rooms in spring, and it’s pretty easy to eat very well at a moderate price as well. London feels incredibly expensive all year, but Paris in spring isn’t so bad.

One of the keys to saving money on a Paris trip is to stay at a hotel that isn’t located in one of the most expensive districts. In many cities it’s worth paying more for a “central” hotel, but in Paris there really is no central. You’ll end up taking the Metro pretty much every time you go see something else, and that’s still true if you stay in the middle of the city.

Like all other large cities, Paris has an attraction pass that lets you buy a card that allows you to ride public transportation and get into most museums and attractions without even standing in line. The Paris Pass seems expensive at first, but if this is your first visit to the city it’s still probably a good idea.

Get out of Paris if you have time

Another important thing to consider is that Paris is more expensive than almost anywhere else in France, except a few spots along the Mediterranean coast. If you are going for a week then it’s a good idea to spend maybe 4 days in Paris and the other 3 somewhere else. You can usually afford the price of the train ticket to get outside of the city by the money you save on hotels and food being cheaper once you get there.