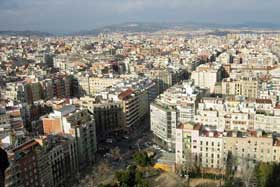 This deal is so amazing that it’s certain to not last too long because either it’s a mistake or the seats will all be gone within a day or two. But for right now you can get astonishing bargains between the United States and Europe on SWISS Air, which is normally not known for cheap prices.

Honestly, these are the lowest trans-Atlantic fares I’ve ever seen, and it does make sense that they’d be offered in late January because this is the absolute bottom of the annual demand for flights not involving sunny destinations.

Right now I’m seeing fares from New York City to Madrid for US$252 roundtrip, connecting through Zurich. You can actually fly to Barcelona for only $248 roundtrip, or to Duesseldorf Germany for $260.

London is only $320, as is Kastrup in Denmark. Belgrade in Serbia is being advertised for $360, and Zurich itself is available for $280 and obviously that’s a nonstop flight.

These prices are the full total after taxes and fees, so this must be some kind of fare sale that offers just a few seats on each plane for almost nothing because normally the taxes and fees themselves will total over $200 when crossing the Atlantic.

Plan a special trip, it’s worth it

In most cases it is unwise to plan a trip you otherwise weren’t considering taking just because of a fare sale, but this sale is so extreme that it’s actually worth it. I’d forget Zurich itself because it’s incredibly expensive once you get there, but cities like Madrid and Barcelona can actually be cheap if you know what you are doing, especially in the off season like this.

I’m seeing even Athens is going as low as $270 roundtrip from New York, and Paris is $330. Brussels is $360 and Amsterdam is going for $390 roundtrip. Many cities aren’t showing as having these amazing deals to them, but in almost all cases there is a city nearby that does. Finding a deal close to the city you most want to go to should be easy for most people.

For example, let’s say you want to visit Budapest, as it’s one of the cheapest cities in Europe for budget travelers, you can fly into Belgrade, which is about a 5-hour train ride that costs way under $50 away. The flight is only $360, which is about half the price of flying directly into Budapest itself, so it’s worth the diversion and it gives you a day or two in another city while you are at it.

With a sale like this it’s time to fantasize about where you dream of going in Europe, and you’ll be able to get there for probably half of the normal price if you can put a trip together right away.