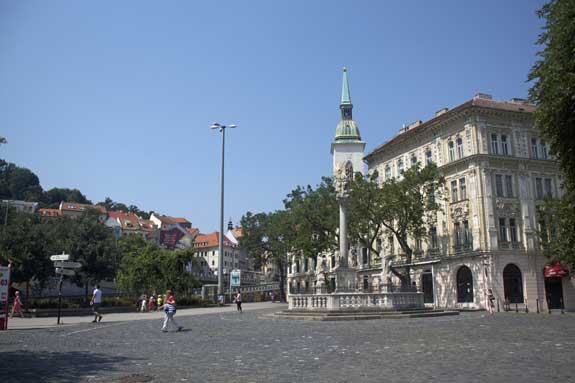 Seemingly among the more forgotten European capital cities, Bratislava is relatively small and low key compared to Prague, and it also suffers a bit by being in the shadow of Vienna, but it’s still definitely worth a visit or even consideration of a place to live.

This is a city that could not be closer to the West, while still being a key part of the east for many decades. Only about 50 kilometers from Vienna, Bratislava is an easy day trip from the Austrian capital, though relatively few people make the effort.

The vibe in Bratislava

With a town center that could easily be walked across in 15 minutes or so, Bratislava is easy to cover in a short time. The main pedestrian street that leads from the riverside up to the banking area is about a 10-minute stroll past countless restaurants, bars, and shops, and also through a few historic plazas that feel like classic Europe.

One reason so few people go to Bratislava is that it has nothing in the way of a checklist attraction (like a huge cathedral or museum), so the key feature is that it’s pleasant and mellow, plus quite a bit cheaper than Vienna or other cities to the west.

What’s left of a large castle is up on a hill looking over the river, and it’s definitely worth a visit, but it’s nowhere near as interesting as Prague Castle. The other most striking local feature is the new bridge that has a restaurant that resembles a UFO way up a tower, and it looks just about as out of place as you might imagine.

As with so many other European cities these days, the social center involves a pedestrian street that is lined with cafes and restaurants on both sides in wide sections, and has a strip of them in the middle in narrow sections. With over 50 to choose from, it should be easy to find one with furniture and an atmosphere that suits you, although the cuisine doesn’t seem to vary greatly among most of them.

The Slovakian cuisine is typical of this part of Europe, with an emphasis on dumplings and stews and sausages, but it does look like vegetarian items are on most menus as well.

Most of the population of Bratislava actually lives on the other side of the river from the historic center, in a huge communist-era housing project, so the part most of us spend time in is even smaller than you’d think based on the overall population number.

The cost of things in Bratislava

Bratislava is far cheaper than nearby Vienna for most things, including housing and hotel rooms. You can get a 3-star hotel room in the center starting at around US$30 per night, and if you spend double that you’ll get something quite nice. The average Slovakian worker also makes quite a bit less than the average Austrian worker, so most day to day things are cheap.

You can get a hearty lunch in a central restaurant starting around US$5, or a bit less if you go off the main track. It’s not as cheap as, say, Sofia or Krakow, but still quite nice compared to most of Western Europe. Beer is the most popular drink and you can get it for as little as €1 per .5L glass if you know where to look, but most people will pay double that or a bit more.