Seoul, South Korea, has one of the best public transportation systems in the world. All of the bus and subway fares depend on how long you travel, and you can buy transit cards in advance to make your trip easier.

Navigating the transit system in Seoul is oftentimes a necessary element for expats moving to South Korea to teach English! 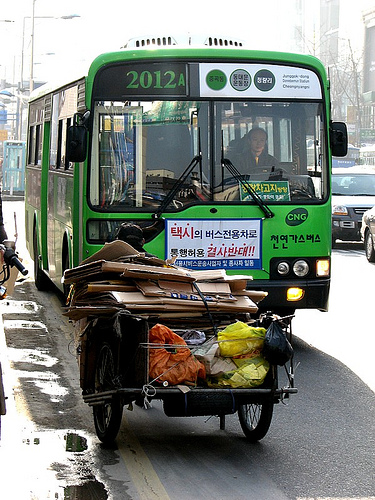 If you understand the bus system of Seoul, it is very easy to navigate. These buses are operated by the Seoul Metropolitan Government.

The Blue Buses are the Main Line, and have the letter “B” on them, and 3 digits. They go on major trunk routes from downtown Seoul and to the satellite cities.

The Green Buses are considered the Branch Line, and have the letter “G” on them, along with 4 digits. They go in between the metro stations, to to nearby residential areas and other bus lines.

The Red Buses in Seoul are the Wide Area Line, and have the letter “R” on them, with 4 digits. They go between major areas, such as downtown and Gangnam, and also to satellite cities.

The Yellow Buses are the Circular Line, which have the letter “Y” and 2 digits. They go through circular belt routes downtown and extend around the metropolitan area.

The subway has 11 lines, which are operated by four companies: Seoul Metro, Seoul Metropolitan Rapid Transit Corporation, Seoul Metro Line 9 Corporation and Korail. The subway system extends all throughout the city, as well as into Incheon, Gyeonggi-do and northern Chungcheongnam-do.

All of the directions on the signs are in both Korean and English. The pre-recorded announcements on the trains and stations are spoken by Korean and then English, and sometimes this is followed by Japanese and Chinese.

The lines are assigned by numbers that have respective colors. The tickets have a base price up to a certain distance, and then you have to add more if you are going to surpass that distance. There are also transportation cards in Seoul, like T-money, Upass and KB Free Pass. The T-money card works as a debit card, and it saves you the hassle of buying a ticket, and even gives you a discount. Children can get 50% discount tickets, and elderly and disabled people are allowed to get free tickets. This system is expanding, as they are building a new line and extending others.