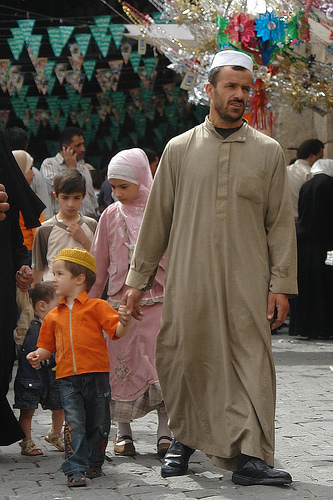 Ethnically speaking, the country of Syria is about 90% Arab. The largest minority is the Kurds, who make up about 3-9% of its population. There are also some Turkish and Armenian minority populations. Arabic is the official language in Syria, and most of the country is Muslim (but the Armenians and Kurds are Christians). Syria is known to be a religiously tolerant country, and its Christian populations are not persecuted.

In this society, families are taken very seriously. Daily life usually involves interacting with or visiting relatives and sharing meals with them. Arranged marriages in Syria are becoming outdated in modern times, but they still do exist. If parents decide on a marriage, it is usually very difficult for their children to reject it. People usually marry others of the same religion.

It is standard that several generations will live under one roof. The head of the household is usually an older male, such as the grandfather or father. Syrians tend to be close with their extended families, retaining a clan mentality.

In terms of social life, men and women usually only socialize with members of the same gender, unless there are large family occasions. When Syrians are greeting members of the same sex, they will do so with a great deal of affection and conversation.

Though some political efforts have been made to try to declare equal rights for women, they are still treated with inferior status and viewed as male property rather than individuals. They traditionally take the role of running the domestic sphere, and though they are legally allowed to work outside the home, there are still many remaining obstacles.

Syrian society is known to be very stratified. Those who are from different economic classes will not usually interact with one another. Generally speaking, those of lighter skin will hold higher economic and social rank than those of darker skin. Some dynamics are changing in terms of classes, as peasants are moving to the cities for jobs, and there is also a growing middle class due to educational influence.

Rich people in Syria have been Westernized in some aspects of life, and own modern appliances like air conditioners and microwaves. Wealthy and modernized young people will often dress in Western-influenced clothing, though women will refrain from wearing blue jeans or shorts. Those who are more traditional will follow the dress of their particular village or tribe.

2 thoughts on “Learning the Social Customs of Syria”