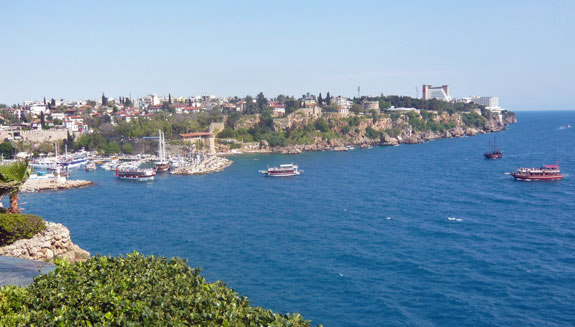 There are thousands of interesting expat destinations around the world, and each has individual things that recommend it. In this series we’ll be exploring some of the notable benefits of some of the more popular destinations, especially those I’ve lived in myself.

We’ll start with Mediterranean Turkey, which covers a lot of ground. The largest city is Antalya but there are many smaller cities like Kas (where I live now), Fethiye, and around the corner up to Ismir and Bodrum. Each of these have the benefits below in common to one degree or another.

1 – The weather is far better than anywhere in Europe

One of the main reasons that people move to Mediterranean Turkey is that it boasts about 300 days of sunshine each year. That beats literally everywhere in Europe, so if you are tired of gray skies this is a place where you’ll usually get no more than 2 in a row even in January.

It does get chilly enough that you’ll need to bundle up a bit to go outside, but there’s no snow and the rain only tends to be bad in short bursts. This is the sort of climate that feels nearly perfect for most of the year, which is something you can’t say about many other places. Admittedly, July and August are quite hot in addition to being relentlessly sunny. Many people rent out their homes or at least go on trips elsewhere during this time of year, but those who stick around enjoy it for the most part.

In the past decade, Istanbul itself has become relatively expensive, to the point that prices are similar to cities like Madrid or Sicily, but along the Mediterranean coast it’s a different story. Rents and home prices are quite cheap, and as a guide it’s helpful to know that 2-star hotel rooms go for around US$20 per night, including a huge breakfast, at least outside of the July and August high season.

You can get a nice meal in a restaurant starting at around US$4, even with a big stack of fresh bread included. Obviously you can also spend way more than this for a restaurant meal, but generally prices seem about half of what you’d pay in most large European cities.

3 – The expat communities are interesting people

At the risk of over-generalizing, there are groups of expats who retire early and move to cheap and sunny places, and then begin a permanent campaign of complaining about their new home country. There are also groups of expats who move to cheap countries where “renting” a girlfriend is extremely easy. In these cases the expat communities are often filled with bitter and boring people who only get together to complain to each other about how awful the country is.

In Mediterranean Turkey, on the other hand, I’ve discovered that nearly 100% of the expats (mostly Europeans) love it and appreciate it here. They also have varied interests and backgrounds, most of them very well educated. It could be that I’ve just gotten lucky with the people I’ve met and gotten to know, but overall it does seem like a happy and non-bitter bunch here, and that makes a big difference in your social life.

4 – The language is relatively easy to learn

I will first admit that I’ve failed to learn more than a few words of Turkish myself, mostly because I hadn’t planned on staying this long, but most of my expat friends here find that learning the language is far less challenging than most others. For one thing it’s a phonetic language using (pretty much) the same alphabet used in English, so you can read signs and labels almost instantly.

Compare that to, say, Thailand, where the language looks like a bunch of squiggles to us until you really concentrate on it. And those tonal languages (again, like Thai) are another huge challenge. Learning Turkish is a breeze by comparison, and that makes it easy to get momentum with it.

5 – The ancient history is almost everywhere you look

Having grown up in Orange County, California, where it was nothing but fields and orange groves until the 1960s, it’s amazing to live in a place with history going back thousands of years. For example, there is an amphitheatre on the edge of the center of Kas, where I live, that is about 2,000 years old. It’s mostly intact, and there isn’t even a fence around it, much less an admission fee.

The same thing is true for this whole region. There are ancient ruins and historic buildings everywhere, to the point that most of them are just sitting there for you to sit on if you like. Many parts of Europe have Roman walls and a few other notable relics, but they are almost all guarded and rare. Here you can trip over ruins just walking into the cafe, which is a novelty that doesn’t wear off too quickly.