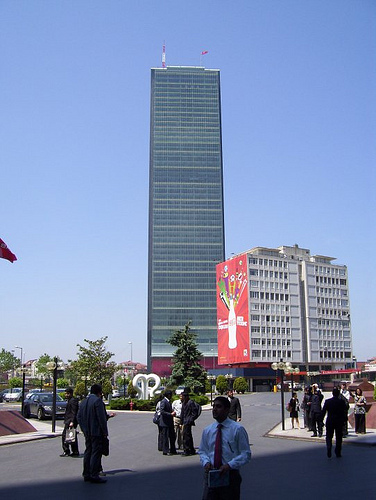 In Turkey, business people like working with people they know and have built a relationship. Such connections can be established by communicating in the office and over extended meals and social events.

Turks respect courtesy, and it is also customary for people to stand close to one another while speaking. You should not back off if someone does this, because it can be considered rude. When getting to know people in the business world, they will likely talk about many other topics, and ask you many questions, and will not get to the point right away. They will likely ask about families, and it is customary to ask them too. Turkish men oftentimes love to talk about soccer, so that could be a topic of discussion to start to become more familiar. Once things start to ease up, it is important to retain eye contact with your Turkish colleagues, as this shows sincerity.

For business meetings, appointments should be made a week or two in advance, probably over the telephone. Avoid scheduling meetings during Ramadan, the Muslim holy time, or during July or August, when people are on vacation. You should arrive on time to a meeting, but do not be surprised if other people do not. The first meeting will probably not have much to do with business, and the Turks will make efforts to get to know new people in the room. The business aspects will probably be discussed during the second meeting, as they want to be comfortable with colleagues and establish a long term relationship.

When finally presenting your business materials to Turkish business people, keep in mind that they like visuals, so along with facts, make sure to have maps and charts to present. Keep in mind that decisions are made at a very slow pace, so be patient. Do not expect giving deadlines to go well, as they like to take their time. They will probably start out with extreme offers or proposals to you in order to get the negotiations started, and work from there. You do not need to focus solely on money when presenting a point, but other values like power and respect.

As for business attire, it should be conservative, especially in the winter. Men and women should wear dark suits, and men should wear a collar and tie. During the summer months in Istanbul, Ankara and Izmir the weather is very hot and humid, so dress is much less relaxed in the business world and people do not always wear ties. It is generally more conservative and traditional in eastern Turkey, so attire is therefore more conservative year round.

In terms of business cards, they should be given with both hands. One side of the card should be translated into Turkish to be polite. Turks may not give a business card to someone until they are sure they will have a long term relationship with the other person.