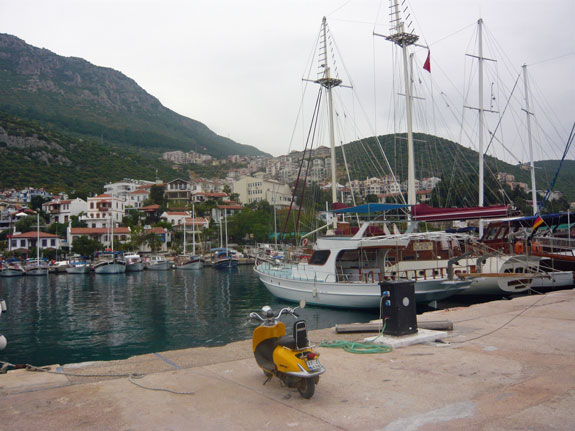 There are many places that we go which seem ideal because they are so easy to reach and so easy to get out of as well, but there are other places that are special partly because they are actually hard to reach. Kaş, Turkey, is such a place. It’s a small fishing village on Turkey’s Mediterranean coast that is at least 3 hours from any major airport, and that has definite advantages.

In this case, being about 3 hours by car or bus away from Antalya (the nearest large city) actually keeps prices down and most of the crowds away as well. The stunning town of about 7,000 permanent residents is just about as far south in Turkey as you can go, giving it a climate that is sunny and pleasant almost the whole year around. The one-week tourists from Germany and the UK tend to stay at resorts that are much closer to major airports, so Kaş never feels cheap or overrun.

The vibe in Kaş

This is a much loved holiday town for those who are familiar with it, and the expat communities are well developed, especially of the Brits. But the vast majority of people you’ll see are just Turks going about their normal lives. Many of them are involved in the tourism trade, working at the 50 or so hotels, or for the boating or diving companies that operate out of the picturesque harbor.

Many of the hotels, plus many of the expats homes, are on the edges of the main town center, but there are plenty of tourists and residents who live in the heart of town as well. This feels like a classic Greek fishing village (it was Greek not all that many decades ago) with a very European feel in spite of its location well into the Asian side of Turkey.

Another wonderful thing about Kaş is that the main highway that connects the coastal town in this area runs at least two kilometers away from the town center, so there is no through traffic at all. This means the only car traffic in the city comes from a few folks living on the outskirts who’ve come in to do some shopping, plus the occassional tour bus that stops for a few hours near the marina.

Much of the center of the town is pedestrian-only, lined with outdoor restaurants that are closed half the year, and only really bustling during July and August. There are 5 small supermarkets plus a green grocer and a butcher shop, and it’s possible to walk from one end of Kaş to the other in under 10 minutes. Most people who come seem to stay for at least two weeks at a time, so there’s nothing frantic about the pace at all.

The cost of living in Kaş

As mentioned near the top, one of the best things about Kaş is that it’s quite cheap considering that it’s also beautiful and idyllic. During July and August the prices do edge higher and the town fills up (though it’s never bursting) but even in June or September you can get basic hotel rooms starting around US$20 per night, with discounts for weekly stays. Apartments (which are larger and nicer) start at around US$150 per week, except for the two peak months.

There are so many restaurants that competition is high, which keeps the costs for food and drinks quite reasonable. You can get a pide (Turkish style pizza) and a salad for around US$4 at many places, or a full dinner with meat, vegetables, potatoes and bread for around US$8 and up. A half-liter bottle of Efes beer, which dominates the market, is advertised for 5 Turkish liras (about US$3.20) at almost every restaurant and bar in town.