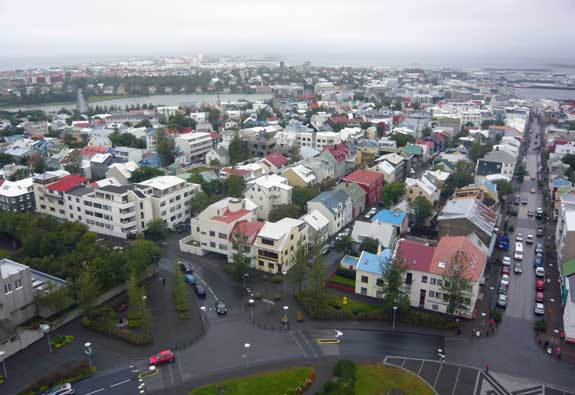 One of the most obvious features of Reykjavik is that it’s a city that no one reaches by accident. Being alone out in the northern mid Atlantic, you really have to want to get there in order to get there, so everything about it is quite deliberate. These days it’s especially popular as the launching point of Iceland vacations for those traveling between Europe and North America, thanks to fare deals that make it easy on the country’s IcelandAir.

If you are considering a visit yourself then there are some important things to know about Iceland itself. Most notably, the country is similar to New Zealand and Sri Lanka in that the capital might be the least charming part of it. In other words, Reykjavik is a place to stop in for a day or two on your way to see the rest of Iceland, rather than the highlight of the trip itself.

The vibe in Reykjavik

Consider its age and that it has so many things in common with continental European traditions, it’s a bit surprising that Reykjavik is mostly suburban rather than urban. You can’t tell by looking at a map, but there is basically one main shopping and entertainment street in the city, with a few businesses on each side street that crosses it. Aside from that, the city is set up for cars and drivers.

If you do have a car then you’ll find a variety of shopping centers and retail outlets around the residential areas, but for visitors on foot the town can actually be frustratingly small and compact. Since it’s always cool or cold and it’s so small, the town center of Reykjavik feels a bit like a mountain resort in spite of it nearly being on sea level.

This one main shopping road is one way most of its length, which is another reason it doesn’t get much car traffic, so the whole area feels very quiet and low key. This adds to the charming feeling of the tourist center, though if you walk more than 2 blocks away you’ll be back on busier streets with few things to see or do on foot.

A few blocks away from the shopping street you’ll find the Hallgrímskirkja, which is the largest and tallest church in Iceland, and the best place to take city photos like the one at the top of this article. It’s a modern looking church with an elevator costing around €5 to take you to the top for your own look around and photo session.

Aside from this the city lacks checklist attractions so most visitors wander up and down the main street doing a bit of window shopping between visits to restaurants or bars. Iceland’s most famous dish is probably the putrefied shark, which most tourists are happy enough to skip, so the restaurant scene tends to be quite international. You’ll find Italian, Chinese, Indian and other international favorites, as well as Mexican and a few other surprises.

The nightlife is said to be among the best in Europe, although that’s a bit hard to believe because there are no more than a dozen or two cafes and bars and clubs in one small area. It seems that it’s the romantic notion of clubbing in an exotic foreign city that appeals to people, especially in mid summer when it never gets anything approaching dark at any time of night.

The bottom line is, if you have one day to spend in Iceland as part of a stop over, there are actually more interesting things to see and do than spend that day in Reykjavik. But if you have many days or a week or more, the capital is worth at least a day, but probably not more than two.

The costs of things in Reykjavik

Even after the currency collapse in Iceland in 2008, the country is still quite expensive and similar to other Scandinavian countries. Most hotels in the city as well as in the whole country are actually guesthouses with few services and rarely an ensuite bathroom. Most also have dorm accommodation, which is also not cheap but at least somewhat reasonable. Expect to pay at least US$100 per night for a double room with shared bathroom in Rekyjavik, and probably double that for a proper hotel with ensuite and guest services. Dorm beds start at around US$30 per night, and even those are in the suburbs.

In all of Iceland there is a huge gap in the cost of food at real restaurants compared to fast food and self catering. At a real sit down restaurant in Reykjavik a soup or salad will start at around US$10 and a main course starting at around US$20. However, at fast food places including Subway or pizza places or hot dog carts or shops you can get a full meal for well under US$10.

Most guesthouses have shared kitchens so preparing your own lunch or even breakfast is a good way to save money. Groceries at most supermarkets, including the Bonus market in the middle of the shopping street, are similar in price to most European cities. In other words, you can buy bread, cheese, and sandwich meats to make filling sandwiches for only US$2 or US$3 each.

Alcohol is particularly expensive in Iceland, as it is in other Nordic countries that tax it partly to discourage binge drinking, so unless you hit happy hour you can expect to pay US$8 or more for a pint of beer, or more for wine or a cocktail. Those prices are for cafes or popular bars, so in a nightclub you’ll be paying much more.