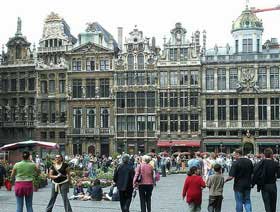 At the moment we are in another one of those in-between periods where flights to some traditionally cheap destinations are quite expensive because one fare sale has ended and the next has yet to begin. For example, flying from New York to London right now shows $670 as the lowest fare, making it more expensive than many cities on the Continent that do have fare sales going.

This again shows that you might find the best prices in the least obvious cities. Typically you’ll get the cheapest European fares to London, Paris, Frankfurt, and Amsterdam, but at the moment you can actually get a cheaper flight into Brussels, which is conveniently between many of those above.

Longtime readers of this blog might be surprised to hear me recommend Brussels as a destination because it’s somewhat overrated on its own. The thing about Brussels is that it’s definitely worth seeing for a couple of days at some point in your life, but more importantly, it’s well connected to many other cities with higher airfares right now.

For example, you can get from Brussels to Amsterdam in a bit over an hour by train, and soon it will be even less when the high-speed route opens up. And speaking of high-speed trains, Brussels is connected to Paris and also London by the Eurostar, so you can be in Paris in under 2 hours, or in London in under 3 hours from central Brussels.

With fares from New York to Brussels starting at only $520 at the moment, you can actually fly there and take the Eurostar into London for most of your trip, for less than it costs just to fly into London itself. These kinds of fare sales can often give you a way of saving money and seeing more of the world at the same time.

Making a multi-stop vacation out of it

So it’s true that a fare sale like this can actually save you a bit of money even if you were planning on flying into another city in the first place, but better still would be using something like this to create a multi-stop vacation. Fly into Brussels and spend two days there, then take the train to Amsterdam, or to Paris, and then to Copenhagen or Munich, and so forth.

If you are there for two weeks you can fit in 4 or 5 cities nicely for only a bit more than it would cost you to stay in one place. In the long run it makes sense to see as many places per trip as possible, because it would cost a fortune and take a lifetime to fly into each city individually.

Some people recommend “slow travel” and to spend a month or more in each city, but using that strategy you’ll never get to see more than a tiny portion of the world out there, so screw that strategy.