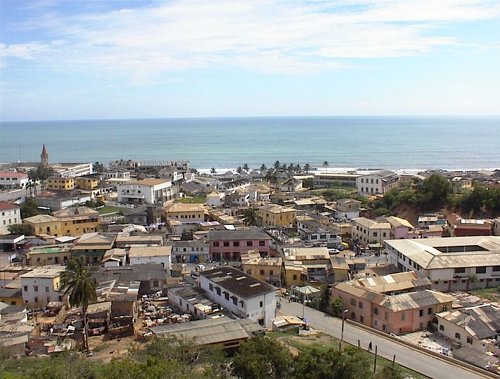 Cape Coast, or Cabo Corso, is the capital of the Central Region of Ghana and is also the capital city of the Fante people. It is also the ancestral town of U.S. First Lady Michelle Obama, and has been visited by her entire family during her husband’s trip to Ghana.

With a population just over 80,000, Cape Coast has a long colonial history and has changed hands between the British, the Portuguese, the Swedish, the Danish and the Dutch. During Portuguese occupation, Cape Coast grew around the beautiful Cape Coast Castle, which is now a UNESCO World Heritage Site. Well worth a visit!

Other attractions include the Cape Coast Center for National Culture, the Oguaa Fetu Afahye harvest festival and, since 1992, the biennial Panafest theater festival. For those interested in the beach life, Brenu Beach Resort is the place to be for that, since it has a private beach and is better for swimming than the heavily used main beaches off Cape Coast central. And not far away, the Nzulezo Stilt Village is a must see, a unique town which sits in the middle of a lake.

While you’re here, hang out on the beautiful beach under the Palm trees and watch the locals pulling in fishing nets and traditional boats. In fact, the town’s symbol is a crab– so you can get some good seafood eats here. Stick around for a long while and take a workshop on batiking, Ghanaian cooking, fishing, and dancing. Once you take the time to get to know Ghana’s friendly, charismatic people, you’ll be hooked.

Cape Coast is also the seat of the University of Cape Coast (UCC), Ghana’s leading university in teaching and research. Cape Vars, as it is popularly called, lies on a hill overlooking the Atlantic Ocean. The city also boasts some of Ghana’s finest secondary and technical schools.

Ghana is a very friendly, laid back country, ideal for first time travelers to Africa, and the people are generally very helpful and welcoming. The fact that they don’t have a well-developed tourism infrastructure (though it is growing steadily) is one of the delights of this country – come here for a genuine experience that you can make into your own. You won’t regret it!