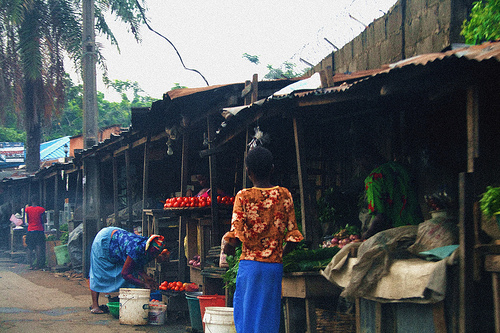 Nigeria has an immense diversity of languages. There are currently 510 different languages that are cataloged. Many people in ethnic groups speak at least two languages. As 75% of Nigeria’s population is rural, lots of these tribal languages are widely preserved in the present day.

English, the country’s former colonial language, takes the role as Nigeria’s official language, even though roughly half of the population can actually speak it. For official, educational and business affairs, English is the most commonly used means of communication. It is is also used as away for people to interact rather than using the hundreds of local languages.

Yoruba is classified as a Niger-Congo language, and is the native tongue of the Yoruba people throughout Western Africa. As there are various tribes of Yoruba people in Nigeria and other countries, there are consequently various dialects of the language. This language uses the Latin alphabet, and out of the 22 million speakers of Yoruba, the vast majority of these are throughout Nigeria.

Edo is another Niger-Congo language with about one million speakers in Nigeria. They live mainly in Bendel State, Ovia and Oredo.

Igbo is the language spoken by the Igbo people who largely live in southeastern Nigeria, who are one of the largest and most influential ethnic groups in the country. There are over 24 million Igbo people living around Nigeria, and some of the states they reside in include Abia State, Awka, Nkanu, Udi and many others. Most Igbo people also speak English as a second language. Igbo is a Niger-Congo language that uses the Latin script, and is the main trade language of several Nigerian states.

Hausa-Fulani is a Chadic language that is mainly used in the northern part of Nigeria. It is traditionally written in a type of Arabic script called Ajami, but is also expressed with the Latin script.

Several million people in Nigeria speak the Tiv language, who mostly exist in the Benue State. It is a Niger-Congo language.

Kanuri is spoken by about 4 million people in Africa, a few hundred thousand of whom live in Nigeria, off of Lake Chad. It is a Western Sahara language that has traditionally used the Ajami Arabic script, but is today being more expressed with the Latin script. People who speak Kanuri as a first language will often speak Arabic or Hausa as a second.

Ibibio is a Benue-Congo language that is spoken in southern Nigeria, mainly in the Akwa Ibom and Cross River states. There are currently about 3.5 million who speak this language.

7 thoughts on “Learning the Languages of Nigeria”