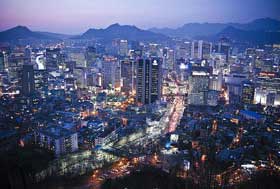 While the talk lately has all been about higher summer airfares and even higher taxes and fuel surcharges, there have been bits of good news that have come through, including this amazing fare sale to Seoul, South Korea at the moment. Right now you can fly from Los Angeles to Seoul for US$530 round-trip, which is about half the normal fare when there is no sale.

From New York City the fare shows up at US$920 round-trip, meaning that you are probably better off getting a separate ticket to Los Angeles and then leaving from there. Of course if you are starting from a different city then your fare will likely be higher than from Los Angeles, but often not by too much, and if you are starting from an airport with a low-cost carriers (like Southwest or Virgin America) that goes into LAX, then you have that option as well.

To be honest I’ve never been to Seoul, or at least not yet, but I’ve done a lot of research about it and I know that it’s an incredibly modern city that is beloved by most who make it there. Seoul itself is enormous, so it’s a good destination for those who like big cities, especially those who like to explore cheap cities where your money goes a long way once you arrive.

Most people agree that once you get out of Seoul then South Korea has many more charms to behold. It’s another country where people are leaving farm communities in droves to find better jobs in the city, so there are many charming small communities that are actually getting less crowded as the years go by.

The food is quite a treat as well, with the pickled kim chee being evidently on nearly every table. I’ve heard that it’s a nice compromise between Japan and China, so you have some fancy elements but also more “home cooking” at reasonable prices available.

Use Seoul as a hub for elsewhere

Another great thing about a cheap flight into Asia is that you can almost always get a cheap flight onward from a low cost carrier, so you can combine a number of cities for only a small extra cost. You could fly to Bangkok or Singapore or Hanoi, or even into Beijing or Shanghai and do a little tour through China.

Those long overseas flights are always going to be the budget killer on a trip like this, so if you can get one for $530 then it can make for a very cheap trip, even if you spend $400 more on a few flights within the region. The great thing about Asia is that as long as you avoid Japan then your costs once you arrive will be much lower than if you went to Europe or Australia or even to another part of the United States.