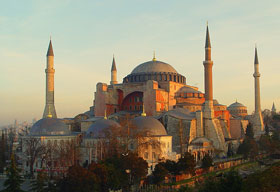 The country of Turkey is so deep into Europe that few people consider it as a first destination on a trip, but right now there are bargain flights all the way to Istanbul, which is just one reason to consider an autumn trip to that ancient city. Istanbul is famously located straddling the border between Europe and Asia, so it’s far more exotic than most other large cities to its west.

Right now you can get round-trip flights from New York to Istanbul for only $540, and that’s about half the price is was in July. You’ll pay about $630 from either Ft. Lauderdale or Miami, and only around $700 round-trip from Los Angeles. All of these are rather long flights for these low fares, which is encouraging that perhaps other destinations might drop in price as the autumn goes forward.

Another fantastic thing about this deal is that October and November are actually the ideal months to visit Istanbul in the first place. It’s not a beach city so being there during the height of the steamy summer holds little appeal. Also, it’s incredibly crowded from May through early October, so just after that you get cooler temperatures, lower crowds, and cheaper hotels prices as well.

Just to prepare you, Istanbul is actually far more European than it is Asian. If you’ve been to, say Madrid, Athens, or Rome, and you’ve also been to Mumbai, Bangkok, and Abu Dhabi, you’ll definitely find Istanbul to be very similar to the European ones and almost nothing like the Asia ones.

Still, as a secular Muslim capital city it’s very unusual globaly. There are huge mosques in most neighborhoods, many of which were built originally as cathedrals, so the history and look of them is completely unique.

Being totally honest, Istanbul is fantastic for a few days or even a week, but if you are coming all that way it’s worth traveling to other parts of Turkey for a few days as well.

The stunning cave cities of Cappadocia are a particular favorite, and you’ll also find that hotels there are remarkably cheap considering it’s a world-class tourist attraction. There’s even a Flintstones Hotel there, which is surprisingly fancy, and the name fits it perfectly.

Head down to the south coast and you’ll arrive in the large city of Antalya, which is known as a cheap sunshine destination for many Brits, Germans, and Scandinavians each year. There are all-inclusive resorts all along the beach in either direction of the city, charging prices as low as US$50 per person including all meals and some entertainment, when booked for a whole week. Combine these three cities and you’ll find that your flight to Istanbul was a ticket to excellent budget adventures.