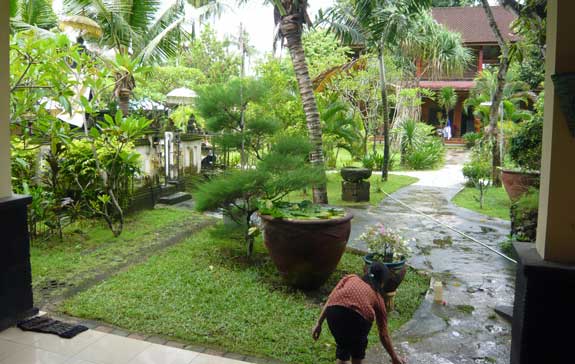 In yet another topic that is a fascinating issue in some parts of the world, and not an issue at all in others, I thought I’d discuss the situation of hiring locals when living in a place where wages are very low. For example, if you are living in, say, Indonesia or Thailand or Egypt, you can hire a housekeeper to work 3 full days each week for about US$100 per month, give or take a bit.

The first natural response is to celebrate because on even a modest Western salary we can live like a big shot, but of course the next thought is to wonder if we are exploiting someone this way? It’s a complicated issue and the answer might be different in each situation, so I thought I’d discuss some of the main points and see if other people have other insights to add.

Local wages can be shockingly low

At the moment I’m living in Serbia and I have a photo-gathering project I wanted help with for a new website I’m building. I asked a friend here who is the manager of a busy cafe in the heart of the city, hoping he could help me find a young person with a computer and a bit of time on their hands. I meekly offered around US$3 per hour for this project, and was shocked with the cafe manager said he’d do it himself, in addition to the 60 hours or so he works at the cafe each week.

Evidently, US$3 per hour is probably more than he makes at his real job. I probably could have offered half that amount and found someone happy to do it, but it would feel like I’m ripping someone off at that level. Hiring “someone in India” to do it is one thing, but hiring a friend who lives in your same town is another.

Then there are the cases of hiring a live-in maid or a gardener, where you learn that finding someone to do it for US$100 per month is easy. Obviously there are other countries where it’s US$300 per month, but still that’s only US$10 per day and some people feel so guilty that they avoid the situation altogether. Is that a better way of doing it? Probably not.

Hiring locals can help you be accepted more easily

At some point I’ll probably move to Bali for a while, and I’ve read a lot about it and discussed it with friends who live there. The common wisdom is that you should hire a housekeeper even if you don’t really think you’ll need it. Paying a local to do your dishes might seem decadent, but the local community will appreciate you giving a job to a local, and they can get you cheaper and better groceries, among other benefits.

Certainly it depends on exactly where you are and if you can speak the local language fluently or not, but in many cases it seems that if you can hire and trust a local helper for a low wage that you’d be crazy not to do it.

So should we pay the going rate, or more?

So expat friends might tell you that you can hire a housekeeper for US$100 per month, but you feel that $300 seems fair and you can easily afford it. Being generous sounds good, though it can come with unexpected downsides. For one thing, you can throw off the local labor market and make it so people with other talents are fighting to get housekeeping jobs for expats because it pays better.

It can also set expectations high for other expats and create bitterness between the workers who aren’t making as much, even if they’ve been employed longer and might be doing harder work. Then there’s the problem of starting so high that you can’t really reward good work with raises because it becomes serious money at some point.

Worst case: Getting a reputation as a sucker

One of the less obvious problems with offering to pay a local double or triple the normal wage is that in many communities you’ll instantly earn the reputation as a sucker, and you’ll lose respect rather than gaining it. I’ve heard many stories, first when spending a long time in Vietnam, that even foreigners (as well as locals) who pay high prices are thought of as stupid.

In many parts of the world, it turns out, driving a hard bargain is a way to get respect rather than seem like a cheapskate. It’s something to think about wherever you are living and take into consideration. You might feel good in the short run by paying what you think is a more fair wage, but it’s very possible that the locals will get to know you as that “idiot who doesn’t know what things are worth,” and you might get taken advantage of in other ways from then on.

Have you had to deal with what to pay a local in a cheap place?

Obviously each area is different and there isn’t one answer for the question. On the other hand, it can be a complicated situation, where by trying to be nice, we are doing far more harm than good to ourselves or others.

Have you dealt with this dilemma yourself?