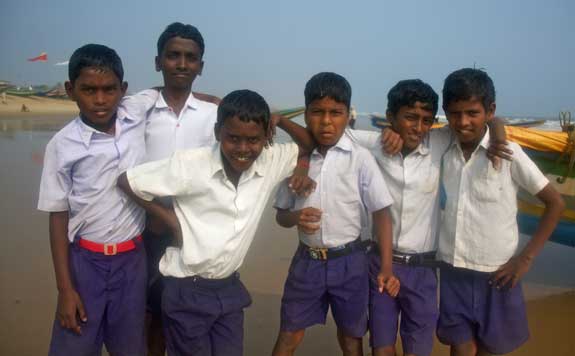 Most of us like to avoid using cliches like the plague, but one cliche that people never seem to acknowledge is the automatic answer people give to the question, “what did you like about the place?” With only a few exceptions, people say, “Oh, the people were so friendly!” The weird thing for me about this is that people say it about almost everywhere, so it’s really not that unusual when you think about it.

Whether people are talking about eastern Europe, or South America or sub-Saharan Africa, they almost always gasp when describing how unusually friendly the people were. I’ve done it as well so I actually believe it to be true almost everywhere, but I still find it odd that we point it out as if it should be a surprising fact.

Language seems to make no difference

As I’ve mentioned before, learning languages is not a strength of mine, so I tend to travel as an English speaker. But still, around the world, it seems to make no difference whether locals speak any English or a little bit or a lot, they are generally very helpful to tourists.

Countless times I’ve been wandering around an area looking for a temple or museum or other common touristy thing, and locals go out of their way to guide me to it, in English or just by sign language. Of course, those who are particularly good at English often get jobs as touts, so they might be helpful as a way of earning themselves a commission. But generally, people just about everywhere I’ve been, which now includes over 70 countries all over the world, have been friendly and helpful.

Large cities with many tourists as the exception?

So I’ve been thinking about this and I’d love the opinion of other people. Just about the only times you don’t hear people mentioning how friendly the people are is when they visit large cities that are loaded with tourists, like New York, London, Paris, or Rome. My guess is that residents and employees in these cities can be surrounded by lost tourists every hour of the day, so giving out tourist advice could be an unpaid full-time job by itself.

Also, people in these large cities are usually moving quickly, so visitors hesitate to ask them questions. In small towns around the world, there are usually people just standing out in front of some shops on the main street, but in big cities there are usually only homeless people standing around on the streets.

On the other hand, I’ve lived in New York City for about 5 years off and on, and dozens of times I’ve had tourists ask me where something is. Not only did I cheerfully answer, but I enjoyed it, so I assume they’d think I was yet another friendly local.

Also, I clearly remember my first visit to Boston, when my brother and I were looking at a local map trying to find something, when a local guy with his thick accent came up to boisterously ask where we were going. Only a few seconds later he gave us perfect directions, and we were on our way. Even in small towns it’s rare for a local to be so bold and helpful at the same time, without a profit motive, so it can happen anywhere.

Are there real exceptions?

I’ve been through Serbia, Croatia, and Bosnia, and found locals there to be very friendly, perhaps because (except for the Croatian coast) they don’t get many tourists there. But I haven’t been to Russia or Ukraine, and I wonder if people in small towns or even in Moscow or Kiev would be considered friendly? In a more closed down culture, it wouldn’t surprise me if people mostly kept to themselves.

Would you consider Russians and Ukranians to be friendly in the same way as other cultures?

Are there other parts of the world where you wouldn’t describe the locals as friendly?