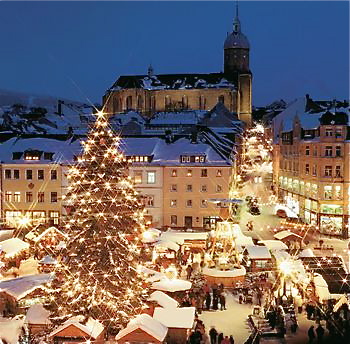 The markets sell food and drink from open-air stalls with other seasonal items. Popular attractions include the Nativity Scene, carved Nutcrackers, candied toasted almonds, traditional Christmas cookies made out of soft gingerbread, a sweet bread with candied fruit called Stollen, and Bratwurst. Traditional drinks are Glühwein, hot mulled wine, and Eierpunsch (an egg-based warm alcoholic drink) to help shoppers and stall owners keep warm in the cold evenings. Many handmade items, toys, books, Christmas tree decorations and ornaments and often other bric-a-brac can be found at a Christmas Market.

Famous Christmas markets are held in Erfurt, Nuremberg, Dresden, Stuttgart and Augsburg. These have become popular to visitors from many other countries. Large Christmas markets are also held in many towns and cities in the United Kingdom. The largest of these are in Leeds and Birmingham, where traders from Frankfurt make up the majority of the stall holders. German immigrants also brought the concept of the Christmas Market to the United States where it has become very popular.

Other cities in Europe with popular Christmas Markets include:

The Christmas Market is a beautiful, evolving tradition and an enchanting way to begin the festive season. Most towns and cities in Europe have some sort of market, and listings can usually be found in local papers or notices posted at central locations such as post offices, town halls, schools or other central businesses. Many shops may also advertise the markets as they will most likely have a stall in the local market.