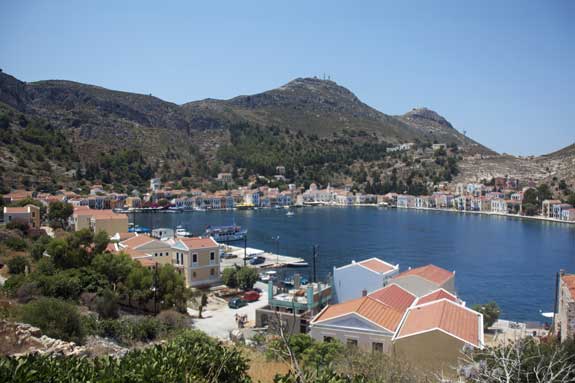 Perhaps the most remote of all Greek Islands, Kastelorizo is a bit like a living museum in many ways. It’s located 125 kilometers east of Rhodes, which is considered the easternmost of the main Greek islands, but it’s literally swimming distance away from the lovely town of Kaş, Turkey, and daily ferries (in season) make it an easy day trip.

On the surface it seems absurd that this island just off the Turkish coast belongs to Greece, but the complicated history of the two countries helps to explain it, which we won’t bother with here. There are large ferries coming once or twice a week from Rhodes, but most of Kastelorizo’s connection to the rest of the world is through the small Turkish tourist and fishing town of Kaş just across the harbour.

The vibe in Kastelorizo, Greece

The Turkish people call it Meis (pronounced ‘mace’) but once you get to Kastelorizo you are definitely in Greece. The main town is set around a natural harbour and there isn’t much else on the island except for a small airport. But the harbour itself is stunning, and the buildings surrounding it all feel at least a century old, in varying states of disrepair. 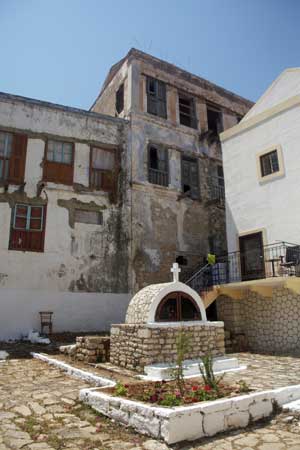 There are many hundreds of homes and buildings in the harbour area, yet the population during the high season (summer) is usually only estimated at 300 to 400 (around the year 1900 the population was estimated at 10,000 and many of the buildings are gone). Considering most of the residents live with their families, this means that at least half or more of the homes are unoccupied. This “ghost town” feeling is a big part of its charm, as you can wander the twisted alleys and barely see another person. During the winter season it’s clear that the population is well down below 200 and maybe even below 100, which gives it an even more unusual feeling.

There is a modest museum, a couple of churches, and a path that leads up to a view point way up the mountain behind the harbour, but the main attraction is the action along the waterfront itself. There are about 15 restaurants that each have tables out over a portion of the walkway along the water, so most people choose to just relax over a beer or glass of wine while enjoying the surroundings.

Most restaurants offer traditional Greek cuisine, which is similar to Turkish cuisine though it also includes pork, which is difficult to get in Turkey. There are a handful of souvenir shops, and a busy Duty Free shop for those going back to Turkey, but there honestly isn’t much else going on. Visitors are pretty much forced to relax and appreciate their surroundings, so it’s very worthwhile for at least a day.

There are a few hotels as well, including a couple that have private “beaches” (really just pavement with lounge chairs on it), and it’s just as pleasant as the sun is going down. Having not visited or stayed overnight I can’t say what the “nightlife” is like, though I’d think there are at least a few lively bars during summer, when many Australians and some others spends weeks at a time there.

The cost of things in Kastelorizo

A beer or glass of house wine will cost around £3 to £4, and a simple lunch will cost somewhere between £7 and £12, so it’s typical of a Greek Island. Many ingredients have to be shipped in from Rhodes, except for some produce that comes in from Kas, so nothing is cheap here.

There are only two hotels that have online listings and both start at around £70 per night, so it’s a mid-priced destination as long as there is availability.