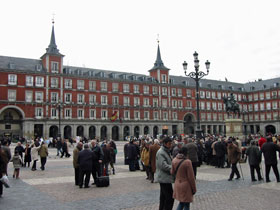 Most regular readers of this site know that we regularly scan for the best deals for trips in the coming month or two, and today we are discussing a great bargain for a winter trip to Spain. Normally it’s much cheaper to fly into Paris, Frankfurt, or Amsterdam from the United States, but right now the best deals are definitely to Spain.

One thing it’s important to realize, however, is that Spain isn’t as close to the Equator as most people think, so it actually has a similar climate to, say, Georgia or Northern California. It’s warmer in Spain than it is in Germany, but you definitely won’t be hitting any beaches, at least on the mainland of Spain.

At the moment you can actually get a round-trip flight between New York and Madrid for only $590, and it’s only $20 more to fly into Barcelona instead. If you haven’t been to Spain at all before it’s worth visiting both cities so you can fly into either one and then take a high-speed train or a cheap domestic flight between them.

Now, these two cities are quite different from one another, and Madrid is probably the better choice for visiting in winter. Barcelona is actually a beach city and most of its famous life and culture takes place outside, while Madrid is more of an indoor city where visiting during the off season can mean smaller crowds, easier access to the best clubs and restaurants, and not much of a downside except for the sun going down well before 6pm.

Another reason Madrid is the better choice is that it’s in the center of the country and during the peak summer season it gets insanely hot there, so you really don’t want to go there between June and September anyway. Barcelona has its sea breezes and even though it does get hot, it’s quite nice during summer. So Madrid is really built for spring, fall, and even winter, and it very rarely snows to slow things down.

Spain is actually more known for good and cheap bus service, compared to most of Europe, but there are fast and efficient train lines connecting most of the big cities as well. So if you choose to stay for more than a week you could easily take a train to Seville or Grenada or down to Malaga. Except in the Pyrenees Mountains in the northern part of the country, snow is very rare anywhere, so you can get around during the cold months without worrying about being stranded anywhere.

You can also get to Morocco by a quick ferry ride from southern Spain. It’s popular to take a day trip from Gibralter or Tariffa, but on those you only get to spend a very touristy day in Tangier. A better idea is to go for at least 2 or 3 nights and skip Tangier and head to Marrakech or Fez instead. It’s all very cheap and easy to do during winter, so a trip to Spain has almost endless