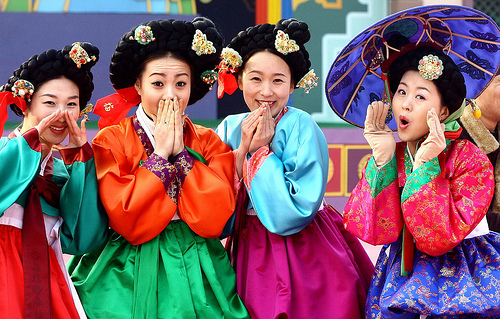 Many English speakers are moving to South Korea to teach English. Before you move, make sure you do some research about the culture and etiquette!

In Korea, family is the most important part of life. Many follow the Confucian philosophy that the father is the provider of the family, and he is responsible for food and shelter. People consider the family over the individual. Anything a family member does represents the rest of the family. Confucianism also stresses duty, honor, loyalty and respect for seniority.

Many families can trace their patrilineal heritage back 500 years. Ancestor worship is a common custom in Korea. Children are brought up that they can never repay debt to their parents. On Chusok, people celebrate by cooking and recognizing their ancestors.

Koreans also stress their concept of “Kibun“which is something along the lines of pride, face or state of mind. Try to avoid hurting anyone’s kibun, especially in public. In the business world, someone’s kibun is hurt if the lower people do not show respect. It plays into all aspects of Korean life.

When Koreans meet an expat, they will generally both shake hands and bow. The lower person bows to the greater, but the elder person shakes hands first. When you enter a social gathering, you should wait to be introduced, and when you leave, you should say good-bye and bow to everyone alone.

If you are invited to a Korean home, you should give a small gift like chocolate or flowers. The numbers 4 and 7 are unlucky, so don’t give things in those quantities. The best colors to wrap gifts are yellow, red and pink. Avoid wrapping in green, white or black. Gifts are not opened right when they are given.

When you are invited to dinner at someone’s house, it is okay to arrive up to 30 minutes late. You should take off your shoes before you go into the house. Hosts will greet everyone alone, and pours drinks for everyone in their presence. They will often also escort you to the gate, as it isn’t customary to say bye inside. You should send a thank-you note after dinner.

Koreans like to do business with people they have a personal connection with. You’ll have to be introduced by a third party. You can establish relationships through attending many informal social gatherings, and eating and drinking a lot with people. Never insult or hurt anyone’s pride in front of other people. When asked a question, respond directly and concisely.

When you attend meetings, try to go first on time to show respect. The most elderly Korean will then enter the room first. Have all your written materials both in your language and Korean.