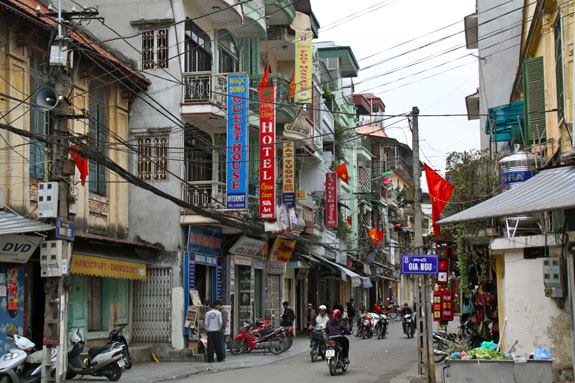 Vietnam’s capital city used to be more famous for a variety of reasons, many of which are at least a bit depressing, but these days Hanoi is known as a big favorite among travelers to Southeast Asia. It’s also perhaps the cheapest large city on earth for budget travelers, so it’s a popular stop for backpacker types who are trying to stretch their funds on the road.

While it’s true that Hanoi is credited with more than 6 million residents, for the visitor it’s actually quite compact and easy to deal with. Unlike Ho Chi Minh City (which is in the south of the country), Hanoi has an easily walkable city center so it’s far less intimidating than other cities of its size.

The vibe in Hanoi

Very popular with English teachers, Hanoi is a magnet for expats and those who are location independent. The French Colonial influence is still very present so the architecture and design of the city is a pleasant mix of East and West. The food is also as delicious as it is cheap. The French influence of making each dish nice to look at while also mixing flavors and using quality ingredients is easy to spot.

The Red River runs though Hanoi, but visitors will barely notice it as the Hoan Kiem Lake is really the central focus. Just north of that lake you’ll find the Old Quarter, which is a tangle of narrow streets loaded with restaurants, bars, retail shops, and many cheap hotels. English is quite commonly spoken in this district, which isn’t true of many other Hanoi neighborhoods.

Central to the Old Quarter you’ll find what’s known as Bia Hoi Corner, with 5 or so bia hoi joints within about 30 meters of each other, 3 of which overlook the same intersection. Bia hoi, in case you aren’t aware, is the cheapest beer in the world, served for about US$0.15 per glass. It’s light, made fresh daily, and sometimes it even tastes good.

Whether it’s over a few glasses of bia hoi, or a cup or two of coffee, there’s a lot of just “hanging out” to be done in Hanoi. Much of the year finds very high heat and humidity so especially during the middle of the day it can be very tempting to just find a cafe or well ventilated restaurant and just chill out until it cools off a bit.

One thing I can’t fail to mention is that the motorbike traffic in Hanoi is legendary and can be frustrating at first. In the stoplight-free part of the Old Quarter this can make crossing even a narrow street difficult, but you’ll get the hang of it quickly.

The local food in Vietnam will be familiar to many. The famous noodle soup known as “pho” is a popular breakfast or lunch items at small shops and street stalls all over the city. Locals almost exclusively eat at street restaurants, sitting in tiny plastic furniture and ordering that particular place’s specialty instead of off a menu. But fortunately, Hanoi is loaded with tourist restaurants that serve similar local dishes along with a huge list of international favorites.

Weirdly enough, pretty much every menu at every tourist restaurant in all of Vietnam will have at least 20 pages, and they all list pasta dishes and usually what they call “pizza corner” as well. If you don’t care for Vietnamese food you’ll still have many choices, but if you do like it then you’ll be able to eat like a king for next to nothing.

The cost of living in Hanoi

Many expats I know say that furnished apartments start at around US$300 per month, even in the more stylish expat neighborhoods like Tay Ho (West Lake). Since the average wage of locals is way less than US$300 a month, you can obviously do better if you are willing to live a more basic life.

Hotels in Hanoi start at around US$5 per night for a private room that is often air conditioned. Needless to say, if you pay a bit more you’ll get a better location or a larger room, and those willing to pay in the US$20/night neighborhood can get quite a nice room in a boutique hotel, with in-room wi-fi.

If you eat along with the locals you’ll be able to get most meals for around US$1 or less, but in tourist restaurants with English-language menus you’ll usually be spending US$1.50 to US$3 for most things, or up to US$5 for a big splurge. A big bottle of beer will cost around US$1 almost anywhere, except at actual bars which charge a bit more. Local vodka is also incredibly cheap, so mixed drinks are as well.