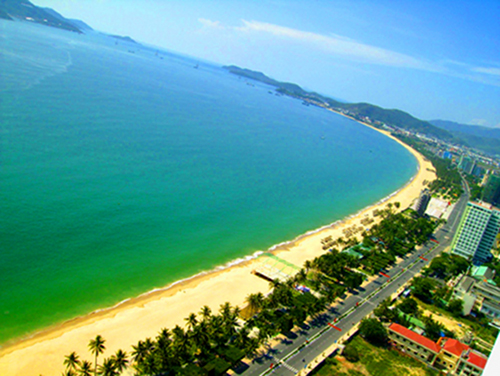 Nha Trang is Vietnam’s most famous seaside resort town and widely considered to be the scuba diving center of the country. Unlike other beach-going destinations in Vietnam, Nha Trang is also more urban and, as a result, more lively. If you love the beach life but like to stay close to the action, this is the place for you.

As said, Nha Trang is well known for its pristine beaches and excellent scuba diving and is fast becoming a popular destination for international tourists, attracting large numbers of backpackers as well as more affluent travelers on the Southeast Asia circuit. It is already very popular with Vietnamese tourists. Here’s the reason: Nha Trang Bay is widely considered amongst the world’s most beautiful bays. Nha Trang is surrounded on all three sides by mountains and a large island on the fourth side (in the ocean directly in front of the city’s main area), blocking major storms from potentially damaging the city.

The best time to be here is definitely in the summer. Because of monsoon season (October to December), winter can be a bit dreary at times, but it’s also a perfect time to recharge while those waves of tourists subside. During the summer, though, there’s always something to do.

The beachfront is a great place to catch many women vendors walking along the beach selling fruit and hot, steamed seafood. Also check out the old fishing village. When the fishing boats are coming in or going out it is a beautiful sight. Well worth seeing! There are also countless waterfalls in the surrounding region, mud baths, a water park and aquarium. There’s really something to do for every day of the week here.

Many cafes in Nha Trang have live music at night time, making for a thriving scene after dark. And of course, as you’d probably inferred, this is the place to be if you love seafood, and it is widely believed to be some of the best in the entire country.

If you’ve already been to Vietnam, you’ve probably already been to Nha Trang, but if you haven’t it’s a must see destination. If you’re interested in moving to this beautiful country, you could do far worse than this breathtaking paradise. Definitely worth a look for expats looking to move to Southeast Asia.