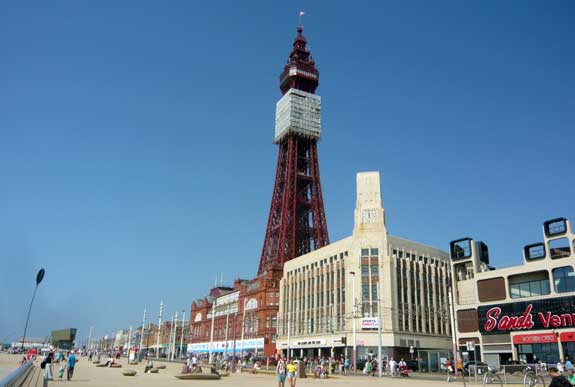 Some say that Blackpool was the world’s first resort for the middle class, or perhaps even the “working class” as the lowest tier is known in the United Kingdom. Its best days clearly seem behind it, but with one of England’s best and longest beaches, the place is still very popular in high season.

With 7 miles of wide and sandy beaches, Blackpool can be a wonderful place to spend some time when a warm sun is shining, but warm and sun tend to be unreliable in the UK. That’s precisely the problem, along with the rise of Easyjet and other low cost airlines, that now most Brits fly off to Spain or Greece or Turkey for a sunshine holiday, where they know they’ll actually get sunshine.

The vibe in Blackpool

As a foreigner, I have a different way of looking at Blackpool than the Brits who make up most of the visitors. The beach is actually very nice, and the new boardwalk area, which is only a year or two old, is clean and inviting as well. Another notable positive about Blackpool is that it’s the cheapest place in the UK due to the huge number of hotels and dwindling number of visitors.

So those are the positives, but it’s not quite so rosy. The town is a combination of old fashioned, cheesy, trashy, and even a bit depressing. Unfortunately, a huge number of the visitors are Brits on stag or hen nights, so large groups come to binge drink cheaply, and they don’t seem to care how much rubbish and confusion they leave behind.

On the other hand, Blackpool has its charm, not at all unlike Atlantic City in its pre-casino era, or Coney Island in New York. There’s something fascinating about a resort area that has fallen out of fashion. The architecture and even the names and signs on the shops are from a long ago era, so it’s sort of a living museum.

The biggest attraction is the Blackpool Pleasure Beach, which despite its name is actually an amusement park across from the beach in the southern end of town. There’s also a new Madam Tussaud’s and a Ripley’s Museum of Oddities, as well as dozens of little arcades and bingo parlors that must have been all the rage a few decades ago.

The food scene leaves something to be desired unless you don’t mind only being able to choose between fish & chips, burgers, and pizza at virtually every restaurant. There are a few chain restaurants as well as a few chain pubs that offer other traditional British dishes, but overall the dining options seem aimed squarely at people in town for a couple days of deep-fried indulgences only.

There’s also a new-looking shopping mall in the northern part of town, as well as the Winter Gardens, which evidently is one of the most famous venues for competitive ballroom dancing. The sidewalks/pavements are wide, and even when it’s cloudy the beach is a lovely place for a stroll (as long as it’s not pouring rain), so Blackpool is certainly worth a look as long as you know what you are getting into.

The cost of things in Blackpool

There are over 500 hotels in Blackpool, with only London having more in the UK, so it’s a competitive buyer’s market. Dozens of places advertise rooms for £15 per night per person, including a hearty full breakfast, and plenty of those are right across from the beach itself. That makes for about US$45, a couple can get a double room and filling breakfast, and some places a block or two inland are even cheaper. Of course you can spend much more if you like, but overall value is fantastic compared to anywhere in Britain.

You can get a small plate of fish and chips for as low as £2.50 at many places, or a large one for around £4. The places that sell pizzas, burgers, and kebabs all have meals starting at around £3, so food is also cheap.

Alcohol is also a great bargain in Blackpool, with many neighborhood pubs offering pints of ale or lager starting around £2. The places along the beach charge a bit more, and some of the most popular ones raise prices on Saturdays and Sundays, but if you walk even one short block inland you will pay no more than £2.40, which is perhaps the best price in the UK, and a big reason so many people come here to party and drink until they pass out.