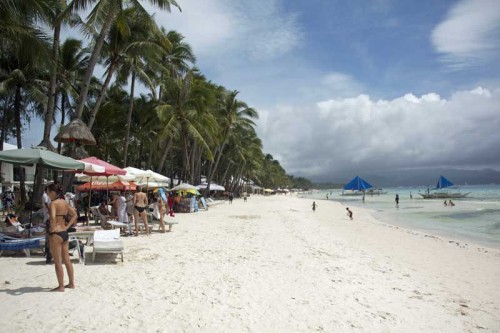 Fans of the Philippines typically struggle as to why the country doesn’t get as many visitors as its neighbors such as Thailand and Indonesia. The one exception within the Philippines is Boracay Island, which lately has been a magnet for visitors from all over Europe as well as within Asia. Only about 8 kilometers tall and about one kilometer wide in the hotel zone, this small island is somehow the biggest draw in a country with 7,000 islands and gorgeous scenery everywhere you look.

One of the more interesting things about Boracay Island is that it’s only had electricity since the late 1980s. And until only about 10 years ago, it was home to only a small number of budget hotels and had nothing luxurious about it at all. The main attraction is White Beach, which takes up most of the west coast, and has stunning sunsets pretty much on a daily basis.

The vibe on Boracay Island

If you’ve been to Bali or Phuket or even Goa, you probably still don’t have a good picture of what Boracay Island is like. There is exactly one main paved road on the island, and it’s called a “highway” but it’s really only about 8 meters across. In fact, most tourists can stay on Boracay for a week and barely even see the main road. Nearly everything is directly on White Beach, which has a sandy walkway carved in front of all the hotels and restaurants, so going barefoot for days on end is a viable option.

So in one sense the island is incredibly laid back, with no motorized traffic at all in the hotel area, but because the beach is densely packed with hotels, restaurants, bars, and souvenir shops, plus countless scuba diving storefronts, it actually seems crowded. In fact, my only complaint about Boracay is that there is constant foot traffic in both directions, and the beach itself isn’t too big, so it can actually feel a bit frenetic.

White Beach is informally divided into 3 areas, with Boat Station 1 being the calmest area and home to most of the larger resorts. Boat Station 2 is in the middle of the island, and it’s by far the most crowded area, while Boat Station 3 is in the south and it’s a bit more spread out with most of the remaining cheaper places.

In addition to the scuba diving (which isn’t that great, I’m told), there are countless boat trips to nearby islands and other mellow water sports. So there’s plenty to keep visitors busy, but it does seem that the main activity is just relaxing in the tropical breezes. One of the nicest features is that you can save a lot of money by staying at a hotel on one of the alleys behind the beach, and still spend all day on the sand if you like. Many restaurants have their own sun chairs out front, so you only need to order some food or a couple drinks and you can stay there for many hours.

Prices of things on Boracay Island

This island is one of the most expensive places in the Philippines, but it’s still quite cheap by international standards. Three star hotels right on the beach start at around US$70 per night, and you can get a four-star place starting at around US$100 per night. If you are willing to stay 100 meters off the beach the prices are about 30% lower, but again, the beach area is small so nothing is more than a 5-minute walk.

Food can be as cheap or expensive as you like on the island. If you follow the locals (about 8,000 people live on the island) you can easily eat lunch or dinner for around US$2, but most tourists opt for the places along the beach, and at those you’ll probably spend US$5 or more. At night there are many buffets right on the beach where you can eat all you like for prices ranging from US$6 to US$15. At the top-end places you get expertly grilled beef and sea food, so it’s quite a good deal.

You can get a fruit shake for US$1.50 to US$2.50 about every 20 meters, but at night most people seem to belly up to the bars, where a San Miguel is only a bit over US$1 at most places. You can get rum or gin-based cocktails for around US$2 at most places, but premium imported brands will cost about double that, if not more.