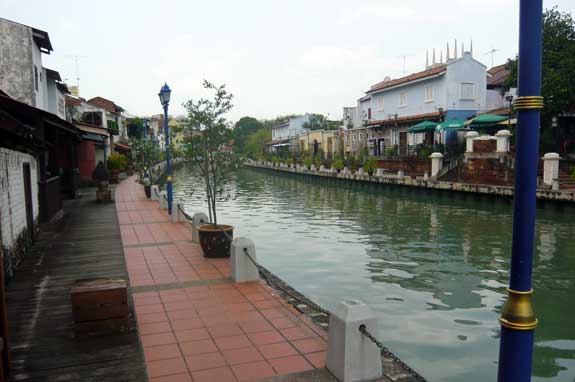 Somehow Malaysia continues to stay out of most conversations when people are discussing where to spend a holiday, and there are advantages to go along with the disadvantages of that. It’s not as exotic as Thailand or Cambodia, not nearly as cheap as Vietnam, and not quite as modern as Singapore, so it kind of falls through the cracks.

While Kuala Lumpur is considered to be a pleasant city, it doesn’t draw too many people from longer distances. One of the highlights when visiting KL, however, is that it’s only 2 hours away by bus to the lovely colonial town of Malacca, which is yet another highlight. It rivals Georgetown on the island of Penang for history buffs, and the food is at least as good.

The vibe in Malacca

When I discuss Malacca (Melaka, in Malaysian), I’m referring to the Old Town area where the tourists generally go. Malacca itself is actually quite a large and busy city, so it’s really only the small sliver in the historical district that contains all the attractions.

Perhaps the single best feature of the town is the colonial architecture and easy going nature of the place. As it’s only one small district with narrow roads, there is virtually no through traffic, so day and night you can usually walk in the middle of the street half the time, only dodging a tourist taxi here and there. This alone makes it very pleasant compared to most large Asian cities, where the sidewalks are mostly missing or filled with motorbikes and you have to dodge busy traffic every step of the way.

Interestingly, along with the Portuguese, Dutch, and British buildings from centuries gone by, there are also a number of Chinese temples as well as historic churches. In the evening most of the historic buildings are illuminated by red flood lights pointing up at their distinct features. This gives the town an unusual and quite romantic feel, which is another reason it’s so popular with Malays and Singaporeans as well.

The Malacca River snakes through the historic district, and there are unbroken sidewalks running most of the way on both sides. A daytime stroll will reveal some stunning architecture and artsy graffiti-style wall paintings, while an evening stroll will put you among many sidewalk cafes and a light display that will suddenly make the whole visit worthwhile.

On Friday, Saturday, and Sunday evenings there is the standard Night Market running along Jonker Street in the center, where you can buy a wide range of kitschy souvenirs, food items, and even housewares. Most of the vendors are Chinese-Malays, and that’s true of most of the restaurants as well, but there are quite a few other local choices in addition to Western options.

The signature dish of the area is a special kind of Laksa, which is a curry soup made with coconut milk and usually shrimp. There are also many restaurants specializing in chicken rice ball, which is simply boiled chicken served alongside rice in the shape of ping pong balls. The chicken can be very good but it’s not something that is likely to change your life.

The cost of things in Malacca

The historic area of Malacca is a bit pricey for Malaysia, which is already one of the more expensive countries in Southeast Asia, but it’s still cheap by international standards. You can get a large hotel room within the historic district starting at only about US$25, and for US$50 you can get something quite fancy. There are many hotels just outside of the heritage area where prices are a bit lower.

Food and drinks are also good value by most standards. You can get breakfast or lunch for US$3 to US$5 if you avoid the places that are mostly filled with Western tourists, but even those are only a bit more expensive. For a proper sit-down dinner you can get something good and filling for US$6 to US$9 at almost any restaurant in town. Drinks such as beer or simple cocktails start at around US$3.50 and up at most restaurants, largely due to the relatively high tax on alcohol in Malaysia.