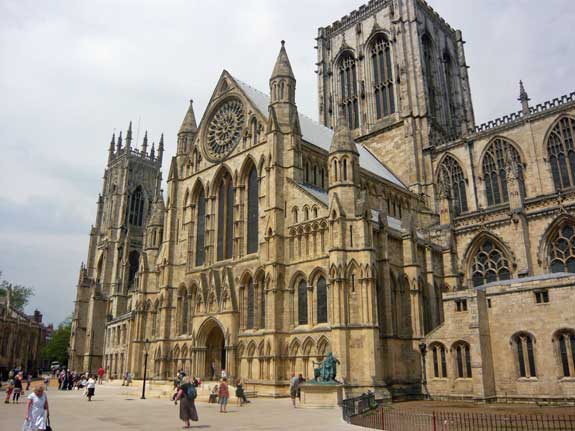 England is one of those countries that so much of the attention for visitors is put on the largest city, most of the rest is ignored. London is obviously one of the world’s great cities, but it has plenty of its own problems, not the least of which are that it’s crazy expensive and also incredibly crowded. Those looking for a more authentic English experience can find it in a relaxing setting and at a relative bargain a few hours by train to the north in York.

According to at least some sources, York is one of most visited cities in England by foreign tourists. While that might be true, you’d never really guess it while you are there because it’s so compact and low key. I just spent a few days there in late June and it felt like there were only a few thousand tourists in town, and most of those were British.

The vibe in York

With only 200,000 residents, York doesn’t really qualify as one of England’s larger cities, and the mid-sized feeling is one of the most pleasant parts of a visit. Instead of a city center based around a shopping center and bank buildings, York’s center is built around its enormous and famous cathedral. The entire old town center is very well preserved and feels as if all the buildings are hundreds of years old, and certainly most are.

There’s an open air market within the town center and several other squares that often have street performers and ice cream vendors just where you’d want them. This is a setting so lovely that if it were in London it would be as crowded as Venice, in that tourists would be tripping over each other’s heels.

The Minster (cathedral) itself is stunning, and as beautiful as any in London or elsewhere in Europe. The city also has a popular Viking attraction that shows you what the city might have looked at 1,000 years ago in Viking times. If that sounds a bit stale you might enjoy one of the handful of “ghost walks” where for about £5 per person you can follow a guide around parts of the old town while listening to ghost stories and encounters.

The city also has a lively food and drink scene that certainly isn’t as varied as you’d get in the large cities, but it does its specialties very well. This is a great place to get traditional English specialties like Yorkshire pudding, fish and chips, or meat pies. There are also a great number of traditional pubs around town that are still dominated by locals because they outnumber tourists even in the touristy parts of town.

The cost of things in York

Among the many benefits of visiting a smaller town in the north like York is that almost everything is quite a bit cheaper than in London. It’s easy to find a lunch or dinner for under US$10 even at a sit-down restaurant, and for under US$20 each you can get something quite fancy and traditional. Hotels also start at US$60 per night for decent places in high season, although most are closer to double that. Still, in London even a tiny dump of a room will cost US$100 in summer.

Prices at the pubs in York are also very reasonable. The most famous one is called the Royal Arms, which is part of the Sam Smiths chain. A lager is only €2.12 and an ale is only £1.88 as of summer 2013. Most traditional pubs charge at least a bit more, but there are also the chain pubs that not only offer cheap pints but also meal specials where you can get dinner and a pint for under US$10.