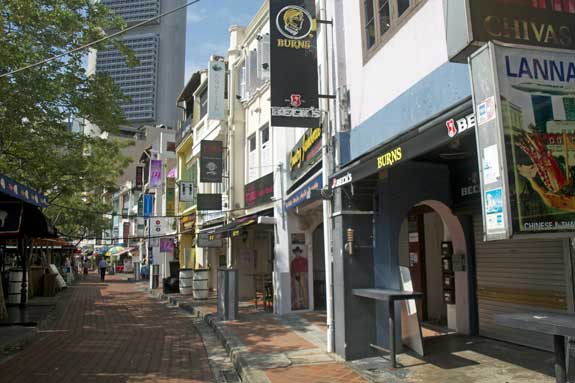 If you spent your whole life in north Atlantic countries and were planning your first trip to Asia, you’d probably have some incorrect assumptions. One would probably be that Asia’s big cities would be pedestrian friendly because private car ownership rates are relatively low. Unfortunately, walking the big cities of Asia can be a dangerous nightmare, with only two exceptions. (Tokyo is well organized, but Japan is sort of its own continent in many ways, so we’ll ignore it for this discussion.)

Singapore was recently declared the wealthiest city on earth by some measures, and among the things it has going for it is that it’s extremely well planned. It has cheap and efficient public transportation, but unlike any other big city in Asia, it’s actually pedestrian friendly. For potential expats, that can be a big deal. Who wants to have to buy a scooter just to go 3 blocks to the market?

The problem with most big Asian cities for pedestrians

Sidewalks, it seems, are an invention of colonial countries, and once they left the remaining locals had their own ideas of what to do with the space. As someone who prefers to walk as a tourist, and has spent most of the last three years traveling around Asia, it’s been frustrating having to deal with the dangerous and inconvenient conditions.

Go to pretty much any big city in Asia, whether it’s Mumbai or Bangkok or Manila or Hanoi, and you’ll see sidewalks along most busy streets, but in between the missing or broken sections you’ll usually find parked motorbikes, restaurant tables, merchandise of the shop behind it, or even just big signs that force a walker into the street. Sadly, those who try to walk will end up spending the majority of their time at the edge of traffic in the street itself, to the point that it’s maddening.

One reason for this is that the locals almost never walk more than a block or so themselves. They have motorbikes or bicycles or buses for longer trips, not to mention the cars, tuk-tuks, and taxis as well. If you walk between attractions in these cities your only company will be other foreigners and tourists in most cases.

Singapore gets it right

Even nearby Kuala Lumpur, which has many things in common with Singapore, is full of frustrations for pedestrians. But Singapore appears to have been planned so that anyone can safely and efficiently walk from one corner of the city to any other. In fact, it’s the only city where I’ve seen joggers in the main streets, because you can actually run for miles safely.

Not only has Singapore prevented businesses and residents from using the sidewalks for personal use, but many streets actually have dual sidewalks on each side. It rains many afternoons in the city all year round, so it’s especially nice to have a clear path that is covered on at least one side of the street.

In addition to sidewalks there are also crosswalks that drivers pay attention to, with Walk signals and timers counting the time down. There are also elevated bridges that go over the busiest streets, with escalators going up to most of them. Make it easy (with an escalator) and almost everyone uses them. Bangkok has many pedestrian bridges but plenty of people ignore them due to the flights of stairs on both sides.

Singapore is an expensive place to live, but it’s little things like this that give it an appealing lifestyle where at least you feel like your money is getting you something. It’s a shame it has so little company in its region.