Traditionally, Indians do not eat with cutlery. Traditional foods like breads and curry are best eaten with hands. Forks, knives and other utensils are considered a barrier to the way you are supposed to enjoy your food. Food should be an all-sensory experience, enjoyed with touch, smell and taste. Eating with hands can be done in a very clean manner, so long as you wash them properly and do not keep long fingernails. Food can be scooped up with flat bread, such as naan, roti or chapti, and lifted up to the mouth. In Northern India, when people eat curry, fingers are not allowed to be stained, and only the fingertips are used. In South India, people do not touch their plates.

There are some exceptions to eating with your hands, such as if a food is soupy. Spoons are used for food like daals or rice. More formal restaurants, or buffets without banana leaves, often offer spoons to eat with. There are forks and knives in India, but they are usually used in the kitchen, or to serve people from a common plate. It is considered rude to touch other people’s food. 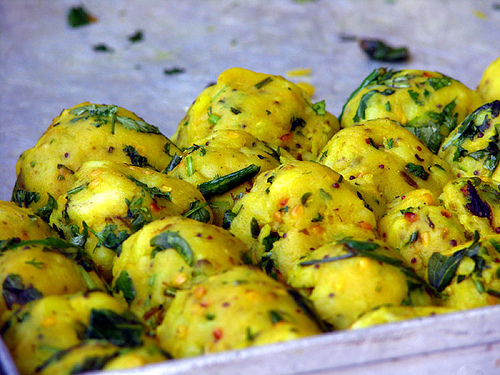 India has the highest number of vegetarians out of any country in the world. Many practice this diet because of religious beliefs. If you make food arrangements with an Indian, make sure you ask about any diet restrictions they may have. There are many vegetarian-only restaurants, and they will indicate this by a sign outside. Be sure not to accidentally order meat at one of these establishments, as it is considered rude. Also, the Hindus will not eat beef, and the Muslims will not eat pork. Pork is not used in Hindu cooking very often either. Restaurants in the more conservative or religious states in India will not have any pork or beef selections. The North Eastern states do have some beef, and some states with a Christian minority will have pork eaters. Expect chicken and lamb to be the main meat selections.

When you are eating, always do so with your right hand. The left is considered unclean. It is becoming more acceptable for left-handed people to eat with their left hands, however. Typically, everyone will wash their hands before dinner and after.

Alcohol is not a big part of Indian culture. Many restaurants do not serve alcoholic drinks, and if they do, there is not a great deal of selection.

2 thoughts on “Learning the Eating Customs in India”